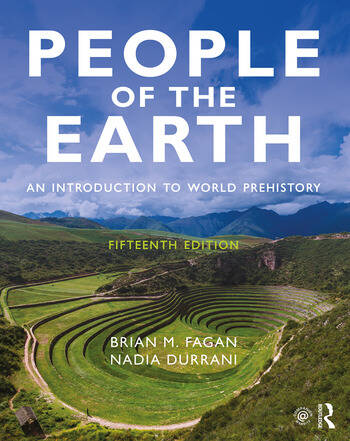 People of the Earth: An Introduction to World Prehistory

People of the Earth is a narrative account of the prehistory of humankind from our origins over 3 million years ago to the first pre-industrial civilizations, beginning about 5,000 years ago. This is a global prehistory, which covers prehistoric times in every corner of the world, in a jargon-free style for newcomers to archaeology. Many world histories begin with the first civilizations. This book starts at the beginning of human history and summarizes the latest research into such major topics as human origins, the emergence and spread of modern humans, the first farming, and the origins of civilization.

People of the Earth

is unique in its even balance of the human past, its readily accessible style, and its flowing narrative that carries the reader through the long sweep of our past. The book is highly illustrated, and features boxes and sidebars describing key dating methods and important archaeological sites.

This classic world prehistory sets the standard for books on the subject and is the most widely used prehistory textbook in the world. It is aimed at introductory students in archaeology and anthropology taking survey courses on the prehistoric past, as well as more advanced readers. It will also appeal to students of human responses to climatic and environmental change.

Brian Fagan is one of the world’s leading writers in the field of archaeology and an internationally recognized authority on world prehistory. He studied archaeology and anthropology at Pembroke College, Cambridge University, and then spent seven years in sub-Saharan Africa. Now Professor Emeritus, from 1967 to 2003 he was Professor of Anthropology at the University of California, Santa Barbara.

Among his scholarly achievements, Professor Fagan was General Editor of the Oxford Companion to Archaeology and has written seven best-selling textbooks. He received the Society for American Archaeology’s first Public Education Award for his indefatigable efforts on behalf of archaeology and education.

has contributed to a wide range of archaeological publications and is the former editor of Britain’s two best-selling archaeological magazines, Current World Archaeology, and Current Archaeology. Over the years she has authored and edited countless articles and books, including co-editing several text-books with Brian.

People of the Earth: An Introduction to World Prehistory