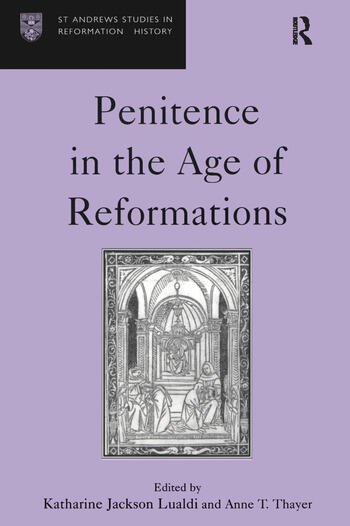 Penitence in the Age of Reformations

This volume is comprised of thirteen essays that explore penitential teachings and practices from the late fifteenth to the early seventeenth centuries in Western Europe and its colonies. Together the essays reveal that in this period, penitence was an increasingly important force shaping the individual and society. Consequently, the authors argue, penitence is central to our understanding of early modern Christianity as it was taught and experienced in everyday life. From Germany to France and to the Americas, Catholics turned to traditional forms of penitence not only to save individual souls, but also to assert their confessional identity. For their part, Protestants established distinctive penitential approaches and institutions in accordance with their own understandings of sin and salvation. In thus examining the treatment of post-baptismal sin across chronological and confessional boundaries, the volume breaks new ground in the history of penance. The volume concludes with a postscript assessing the ways in which the essays enrich the current state of scholarship on penitence and encourage further research. Katharine Jackson Lualdi is an independent scholar. Anne T. Thayer is Assistant Professor of Church History at Lancaster Theological Seminary, Lancaster, Pennsylvania.

'(a) lively and valuable collection ...' Journal of Ecclesiastical History '... a well-focused collection exemplifying the state-of-the-art.' Religious Studies Review 'This very welcome collection of essays...tells us a great deal of interest...' Sixteenth Century Journal

Penitence in the Age of Reformations