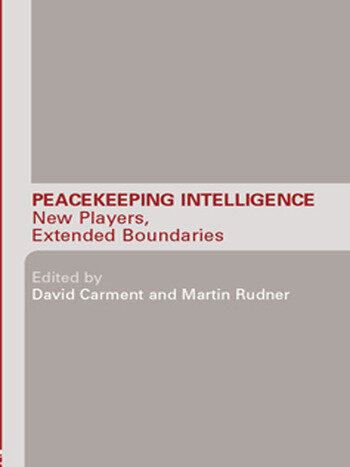 This is a new evaluation of the role, dynamics and challenges of intelligence in peacekeeping activities and its place in a much wider social, economic and political context.

It assesses the role of coalition forces, law enforcement agencies, development institutions, and non-governmental organisations who have become partners in peace support activities.

Peacekeeping Intelligence (PKI) is a new form of intelligence stressing predominantly open sources of information used to create Open Source Intelligence (OSINT), and that demands multi-lateral sharing of intelligence at all levels. Unlike national intelligence, which emphasizes spies, satellites, and secrecy, PKI brings together many aspects of intelligence gathering including the media and NGOs. It seeks to establish standards in open source collection, analysis, security, counterintelligence and training and produces unclassified intelligence useful to the public. The challenges facing peacekeeping intelligence are increasingly entwined with questions of arms control, commercial interests, international crime, and ethnic conflict.

This book will be of great interest to all students and scholars of military and security studies, intelligence and peacekeeping.

Part I - Peacekeeping and its Intelligence Requirements

2. Robert Martyn: Beyond the Next Bound: The Future of Military Intelligence in Peace Support Operations

3. Michael Hennessy: A Reading Of Tea Leaves – Toward a Framework for Modern PKI

6. Walter Dorn: Intelligence at UN Headquarters? The Information and Research (I&R) Unit and the Intervention in Eastern Zaire (1996)

9. Eric Berman: Field Research on Small Arms and Its Importance for Peace Operations: A Practitioner’s View

11. Chris Penny: Just Peacekeeping: Managing the Relationship between Peacekeeping Intelligence and the Prevention and Punishment of International Crimes

14. Robert Grossmann-Vermass A Bridge too Far?: The Theory and Practice of the Effects-Based Concept and the Multinational Inter-Agency Role