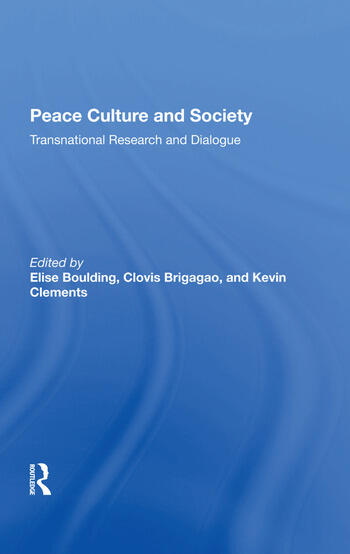 "1989 certainly represents one of those moments. yet, when IPRA held its 12th General Conference in August 1988, few of the participants imagined that within the space of 13 months popular social movements would topple socialist regimes in Poland, Czechoslovakia, Hungary and the German Democratic Republic.Nobody imagined the Berlin wall or the wire fence between Hungary and Austria being dismantled. Even fewer contemplated the overthrow of the Ceaucescu regime in Rumania, pluralistic politics in Bulgaria, a single German economy or a reunited Germany."

Elise Boulding, current Secretary General of IPRA, is Professor Emerita of Sociology, Dartmouth College. A futurist, she writes on local-global peace-building, development, family life and women. A founding member of IPRA, she served on the Commission to recommend the establishment of the U.S. Institute of Peace, has been a member of the UN University Council (1980–85) and served on the UNESCO Peace Prize jury (1982–87). Clovis Brigagao, a political scientist, is currently Chief of Cabinet of the State Government of Rio de Janeiro. He was Secretary General of IPRA during 1986–88, and is also a research associate at the University of Brasilia and on the Advisory Board of the Commission Sudamericana de Paz, Santiago. He has written in the fields of international relations, peace studies and ecology, and is the founder of IPRA’s Study Group on Ecological Security. Kevin Clements is Senior Lecturer in sociology, University of Canterbury, Christchurch, New Zealand. He writes on development, defense and security issues, and the problems of multilateral disarmament. He is the new Secretary General of the Asian Peace Research Association as of fall, 1990, and will be one of the organizers of the second Pugwash Symposium on Peace and Security in the Asia-Pacific Region in 1991.