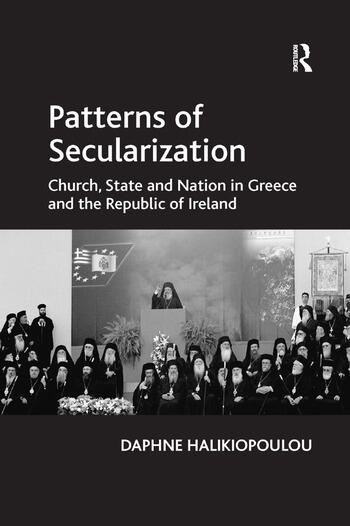 Patterns of Secularization: Church, State and Nation in Greece and the Republic of Ireland

The politicization of religion is a central feature of the modern world, pointing to the continued relevance of the secularization debate: does modernization result in the decline of the social and political significance of religion or rather in a reaffirmation of religious values? This book examines the emergence of different patterns of secularization. It identifies the circumstances under which religion may remain or cease to be politically active and legitimate in societies where secularization has been initially inhibited given a strong identification with the nation. Arguing that in such societies the Church draws its power not only from its relationship with the state but also its relationship with the nation, this book identifies two patterns of secularization: (a) co-optation, and (b) confrontation. The redefinition of the Church, state and nation nexus is likely to result in secularization if (a) the church obstructs the modernisation process (church and state), and (b) if external threat perceptions decline (church and nation). The simultaneous presence of these constraints serves to redefine the role of religion in the formation of national identity. Comparing Greece and the Republic of Ireland as two cultural defence cases with a strong variation in the political and social salience of religion, this book explains Ireland's current secularization drive in terms of the fluidity of Irish national identity and the rigidity of the Irish Catholic Church (confrontation). It contrasts this with the Greek case where the Church's resilience is linked to institutional flexibility on the one hand and a reliance on an ethnic/religious national identity on the other (co-optation). In conceptualizing the contemporary role of religion in the Republic of Ireland and Greece, this book draws a number of generalizable conclusions about the political role of religion in cultural defence cases.

Contents: Introduction; Part I Theoretical and Historical Considerations: National identity and the secularization debate; The origins and consolidation of 'cultural defence' in Greece and the Republic of Ireland. Part II Church, State and Nation: Church and state: nationalist legitimisation versus 'moral monopoly'; Church and nation: external threat perceptions, national identity and religion. Part III Portrayals of the Nation in State and Church Discourse: State discourse and the redefinition of national identity in the Greek and Irish educational systems; Church discourse and nationalist mobilization. Conclusion: Pattern of secularization; Appendix; Bibliography; Index.

Daphne Halikiopoulou is Fellow in Comparative Politics at the London School of Economics, UK

'Approaching the problem of the different patterns of religion and secularization in Greece and Ireland with a nice sense of specific cultural differences and the historical sources of varied outcomes Daphne Halikiopoulou extends and deepens our understanding of distinctive patterns of secularization in the far West of Europe and the far South-East. The book is attractive and persuasive reading: A major contribution to the field.' David Martin, London School of Economics, UK and Fellow of the British Academy 'Catholicism was a bastion of Irishness under the British. Orthodoxy underpinned Greek identity in Ottoman times. Today the Greeks repay their Church by attending regularly, but in Ireland it is in free fall. Why? Halikiopoulou’s fascinating, solidly-researched story provides a convincing answer. In so doing, it is the first to explain why some nationalistic religions secularize and others do not.' Eric Kaufmann, Birkbeck College, University of London, UK 'In this important study, Daphne Halikiopoulou shows how similar the modern Greek and Irish nation-states are in having religious foundation, and also how different. Making a significant contribution to secularisation theories, she convincingly explains why Greece is experiencing an Orthodox revival, whereas in Ireland the Catholic Church is in headlong decline. Incisively written, this will interest scholars of nationalism as much as sociologists of religion.' John Hutchinson, London School of Economics, UK ’This will cause some readers to speculate if and how national identity shifts to and from religion. This study is useful for students of religion and for those interested in European modernity and issues of religious nationalism.’ Journal of Church and State 'This monograph is a valuable contribution to the emerging literature on secularization in Western society that attempts to adduce empirical evidence to build a convincing picture of religious change, rather than simply theorizing the ine

Patterns of Secularization: Church, State and Nation in Greece and the Republic of Ireland