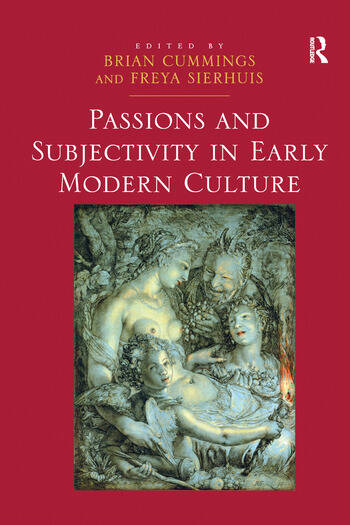 Bringing together scholars from literature and the history of ideas, Passions and Subjectivity in Early Modern Culture explores new ways of negotiating the boundaries between cognitive and bodily models of emotion, and between different versions of the will as active or passive. In the process, it juxtaposes the historical formation of such ideas with contemporary philosophical debates. It frames a dialogue between rhetoric and medicine, politics and religion, in order to examine the relationship between mind and body and between experience and the senses. Some chapters discuss literature, in studies of Shakespeare, Donne, and Milton; other essays concentrate on philosophical arguments, both Aristotelian and Galenic models from antiquity, and new mechanistic formations in Descartes, Hobbes and Spinoza. A powerful sense of paradox emerges in treatments of the passions in the early modern period, also reflected in new literary and philosophical forms in which inwardness was displayed, analysed and studied”the autobiography, the essay, the soliloquy”genres which rewrite the formation of subjectivity. At the same time, the frame of reference moves outwards, from the world of interior states to encounter the passions on a public stage, thus reconnecting literary study with the history of political thought. In between the abstract theory of political ideas and the inward selves of literary history, lies a field of intersections waiting to be explored. The passions, like human nature itself, are infinitely variable, and provoke both literary experimentation and philosophical imagination. Passions and Subjectivity in Early Modern Culture thus makes new connections between embodiment, selfhood and the emotions in order to suggest both new models of the self and new models for interdisciplinary history.

'... richly learned essays ... such a volume is to be welcomed by all of us engaged in the history of the emotions.' Renaissance Quarterly '... a remarkably wide-ranging and insightful volume ... a rich and important contribution not only to debates about the passions and subjectivity, but to the broader fields of early modern ethics, politics, philosophy, and theology.' Renaissance Studies '... well worth consulting for anyone interested in the passions in early modern thought, literature, and history.' Parergon