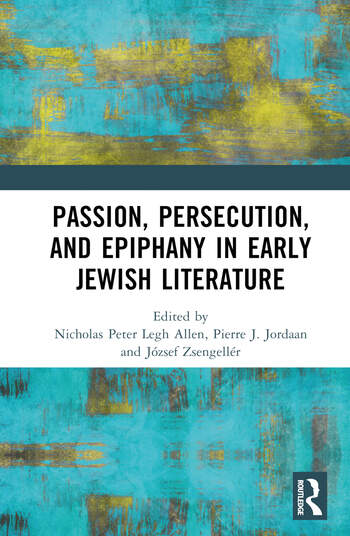 This volume examines Jewish literature produced from c. 700 B.C.E. to c. 200 C.E. from a socio-theological perspective. In this context, it offers a scholarly attempt to understand how the ancient Jewish psyche dealt with times of extreme turmoil and how Jewish theology altered to meet the challenges experienced.

The volume explores various early Jewish literature, including both the canonical and apocryphal scripture. Here, reference is often made to a divine epiphany (a moment of unexpected and prodigious revelation or insight) as a response to abuse, suffering and passion. Many of the chapters deal with these issues in relation to the Antiochan crisis of 169 to 164 B.C.E. in Judea, one of the more notable periods of oppression. This watershed event appears to have served as a catalyst for the new apocalyptic texts which were produced up until c. 200 C.E, and which reflect a new theological dynamic in Judaism – one that informed subsequent Christianity and Rabbinic Judaism.

will be of interest to anyone working on the Bible (both Masoretic and LXX) and early Jewish literature, as well as students of Jewish history and the Levant in the classical period.

1. Passion, Persecution and Epiphany: the David and Bathsheba Affair According to the LXX, Josephus and the Rabbis

2. Victorious Victims and Prayers for the Deceased: Possible Links Between Conceptual Tension and Progressive Doctrine in 2 Maccabees 12

3. Did the Devastating Persecution and Reforms of Antiochus IV Epiphanes have an Impact on the LXX Version of Proverbs?

4. Passion, Persecution, and the Strategic Discourse of the Body in 2 Maccabees 7

6. Human and Divine Persecution in the MT and LXX Lamentations 3:52-66

7. Establishing and Maintaining Communal Identity through Food in Times of Persecution: An Interpretation of Daniel 1:8-16"

8.The Death of Antiochus IV Epiphanes In 2 Maccabees 9: Persecution and Epiphany as Dramatic Irony

9. Pathos and the Passions in Josephus’s Judaean War

11. Persecution and Epiphany in 2 Maccabees

12. A Battle of Honour! Persecution in 2 Maccabees 7:1–42 as Part of a Post-War Ritual in a Challenge for Honour to Establish Power and Dominion

13. Hellenistic Persecutions of the Samaritans According to Josephus Flavius

Nicholas Peter Legh Allen is a professor at the North-West University (Potchefstroom Campus), South Africa. He currently teaches Ancient Cultures. Nicholas is a confirmed transdisciplinarian and accordingly has authored and co-authored, inter alia, six books, more than a score of accredited articles and numerous digital interactive publications on topics including African elephant conservation, sindonology, history of optical technology, Judaica and Early Christian Church history (specialising in Josephus Flavius). He is the originator of the photographic hypothesis for the manufacturing technique employed on the Shroud of Turin (1988).

Pierre J. Jordaan is a professor at the North-West University (Potchefstroom Campus), South Africa. He is a founding member of the LXXSA (Association for the Study of the Septuagint in South Africa) and is currently co-leading SACRIA (Septuagint and Cognate Research in Africa) with Nicholas Allen. He has organised several workshops and conferences on the apocrypha/deuterocanonical and was instrumental in the subsequent publication thereof. He has published almost sixty papers in accredited journals and is a rated researcher in South Africa with the National Research Foundation. His particular interest is the Septuagint, specifically the books 2 Maccabees, Judith and Susanna in the Additions to Daniel.

is professor and chair of Biblical Theology and History of Religions at the Theological Faculty of the Károli Gáspár University of the Hungarian Reformed Church in Budapest, Hungary. He is currently the rector of the Károli Gáspár University. He is a Calvinist minister, Hebraist and theologian. His main fields of research are the history, religion and literature of the Samaritans; the religion and literature of early Judaism with a focus on the Deuterocanonical literature; and the textual and canonical history of the Hebrew Bible/Old Testament. He is author and editor of several books, and has published more than 150 articles and papers in English, German and Hungarian. He also serves as editor and staff of three Hungarian and one international journal (Biblische Notizen).