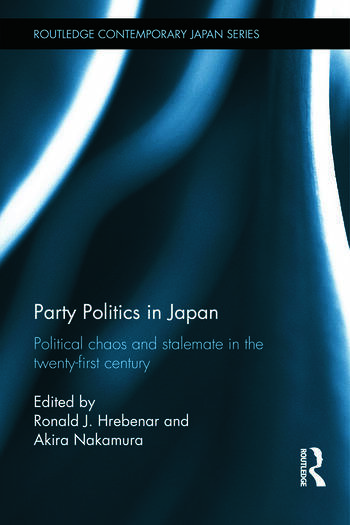 Party Politics in Japan: Political Chaos and Stalemate in the 21st Century

The Japanese political system is a parliamentary democracy and was the first western style government in Asia when the parliamentary system was adopted in the 1880s. It has a multiparty system, free elections, and a parliament that functions much the same way that any other democratic parliament functions, however for much of its existence the Japanese party system has been dominated by one party. This fact is crucial to understanding contemporary politics in Japan, especially since the long term ruling party, the Liberal Democratic Party, is once again back in power.

This book presents an up-to-date analysis of the political parties that make up the Japanese party system and their impact on Japanese politics and government. Given that the executive branch is selected as a result of the pattern of party numbers in the parliament, to understand Japanese politics and policy, one must first know the nature of the ruling and opposition parties and their leaders. Indeed, in the past decade the quality of Japan’s government has been closely associated with the strengths and weaknesses of Japan’s prime ministers and the dominant party in the system. This book focuses on a central question: why Japanese politics and government has been so dysfunctional in the past two decades? With this question in mind, the chapters provide key background information on Japanese politics and political parties; discuss each of the major political parties that have governed Japan since 1955; and finally, examine the December 2012 House of Representatives elections that returned the LDP to power, and the differences between the First (1955-1993) and the Second Post War Party Systems (1993- ).

provides a comprehensive analysis of the past sixty years of Japanese party politics. As such, it will be of great interest to students and scholars of Japanese politics and Asian politics, as well as to those interested in political parties and political systems more broadly.

1. Japan’s Changing Party System: An Introduction, Ronald Hrebenar and Mayumi Itoh 2. The Rules of the Election Game in Japan, Ray Christensen 3. Japanese Political Finance and Its Dark Side, Brian Woodall 4. From Would-be ‘Third Force’ to Governing Party: The Triumph and Fall of The Democratic Party of Japan, Patrick Koellner 5. The Liberal Democratic Party: The Persistent Ruling Party of Japan, Akira Nakamura and Ronald Hrebenar 6. The New Komei Party: Japan’s Buddhist Party and LDP’s Coalition Partner, Mayumi Itoh 7. The Fall of the DPJ and Return of the LDP to Power: The December 2012 House Elections, Ronald J. Hrebenar and Koji Haraguchi 8. The Second Party System and the Future of Japanese Politics, Ronald J. Hrebenar

Ronald J. Hrebenar is Professor of Political Science at the University of Utah, USA.

Party Politics in Japan: Political Chaos and Stalemate in the 21st Century