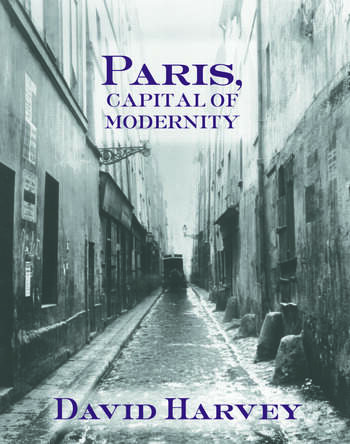 Collecting David Harvey's finest work on Paris during the second empire, Paris, Capital of Modernity offers brilliant insights ranging from the birth of consumerist spectacle on the Parisian boulevards, the creative visions of Balzac, Baudelaire and Zola, and the reactionary cultural politics of the bombastic Sacre Couer. The book is heavily illustrated and includes a number drawings, portraits and cartoons by Daumier, one of the greatest political caricaturists of the nineteenth century.

David Harvey is one of the world's leading critical intellectuals. He is the author of 10 books, many of which are classics. He now teaches at the CUNY Graduate Center and the London School of Economics, after many years teaching at Johns Hopkins and Oxford.

"David Harvey is perhaps the most important urban scholar writing in the English language, and here he is at his best. He has given us a multifaceted but synthetic history of the emergence of urban modernity in its putative birthplace. It is a tour de force, brilliantly attentive to connections, relations, and distinctions, while it is remarkably inclusive in its coverage, from infrastructure and finance to poetry and the political imagination. Not only is it an immensely readable history, but it brilliantly brings together the structural and moral narratives of Second Empire Paris." -- Thomas Bender, University Professor of the Humanities and Professor of History and author of The Unfinished City: New York and the Metropolitan Idea
"Returning to a topic that has long fascinated him, David Harvey gives us a vivid social, literary, economic and pictorial geography of the making of Paris during its nineteenth century transition to capitalist modernity. Carefully argued, fluidly written, pointedly political, and lavishly illustrated with period cartoons, caricatures and photos, this book is spectacular both in its analysis and in the "structure of feeling" it creates for the moment of Parisian modernity. His most original work in more than a decade, Harvey does for Paris what Schorske did for fin de siècle Vienna." -- Neil Smith, author of American Empire
"Mr. Harvey handles numerous primary and secondary sources and uses theoretical models effectively to examine the motivations for and and consequences of Baron Haussman's re-creation of Paris. The book is neatly illustrated by art and literature from the period..." -- The New York Sun
"David Harvey is a noted geographer. Harvey defines modernity as "creative destruction". He is good on destruction and even better on the creative ways it was depicted and resisted. ...it is a handsome volume, and its many illustrations will appeal to many readers
." -- Journal of Regional Science