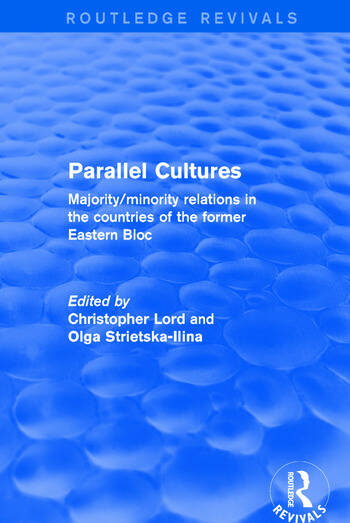 Parallel Cultures: Majority/Minority Relations in the Countries of the Former Eastern Bloc

This title was first published in 2001. This stimulating and well-written text is particularly suitable as a subsidiary text for courses in politics, sociology and ethnic studies.

’I can only highly recommend a book which is not only thought-provoking and valuable, but is also a reaction on behalf of the human imagination, common sense and generosity of spirit to the many manifestations of retrogressive thinking still prevalent today. Parallel Cultures is a fascinating study by a group of young scholars from what used to be called the Eastern Bloc...essential for those who believe tolerance to be the guiding light of the twenty-first century (and even more essential reading for bigots!).’ Sir Peter Ustinov ’Parallel Cultures may well become a catchword in discussion of identity, nationalism, or minorities as much as, say, imagined community� or invention of tradition�...Lord’s essay founds a moral anthropology.’ Professor André Liebich, Graduate Institute of International Studies, Switzerland ’...polemic and grappling with a problem that is of real and contemporary importance. That is what will make it very well worth buying.’ Maurice Keen, University of Oxford, UK

Parallel Cultures: Majority/Minority Relations in the Countries of the Former Eastern Bloc