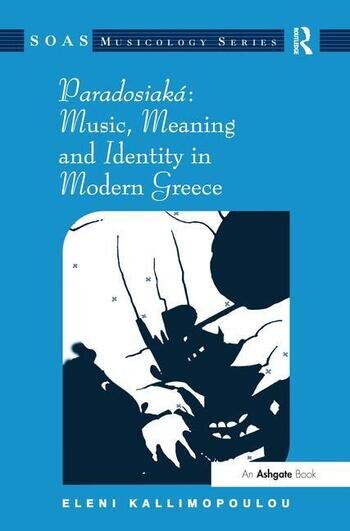 Since the 1980s, musicians and audiences in Athens have been rediscovering musical traditions associated with the Ottoman period of Greek history. The result of this revivalist movement has been the urban musical style of 'paradosiaká' ('traditional'). Drawing from a varied repertoire that includes Turkish art music and folk and popular musics of Greece and Turkey, and identified by the use of instruments which previously had little or no performing tradition in Greece, paradosiaká has had to define itself by negotiating contrastive tendencies towards differentiation and a certain degree of overlapping in relation to a range of indigenous Greek musics. This monograph explores paradosiaká as a musical style and as a field of discourse, seeking to understand the relation between sound and meanings constructed through sound. It draws on interviews, commercial recordings, written musical discourse, and the author's own experience as a practising paradosiaká musician. Some main themes discussed in the book are the migration of instruments from Turkey to Greece; the process of 'indigenization' whereby paradosiaká was imbued with local meanings and aesthetic value; the accommodation of the style within official and popular discourses of 'Greekness'; its prophetic role in the rapprochement of Greek culture with modern Turkey and with suppressed aspects of the Greek Ottoman legacy; as well as the varied worldviews and current musical dilemmas of individual practitioners in the context of professionalization, commercialization, and the intensification of cross-cultural contact. The text is richly illustrated with transcriptions, illustrations and includes two audio CDs. The book makes a valuable contribution to ethnomusicology, cultural studies, as well as to the study of the Balkans and the Mediterranean.

Eleni Kallimopoulou completed her PhD in ethnomusicology at the School of Oriental and African Studies, University of London, in 2006, where she was subsequently employed as a teaching fellow in the music of the Near and Middle East. She is currently a lecturer in the Music Science and Art Department at the University of Macedonia in Thessaloniki, Greece

4-Star rating in Songlines ’Throughout the book, the author deftly combines detailed musical transcription and fine-grained analysis of the recorded examples contained in the CDs, with interviews and documentary sources... Kallimopoulou provides a fascinating discussion of musical politics... one of the book’s great strengths is its treatment of the work of musicologist and folklorist Simon Karas... Given its rich linguistic and historical particularities, this book will appeal to graduate students and specialists in Balkan, Mediterranean, and/or Middle Eastern music who wish to explore how music articulates and instantiates social, political, and cultural identities in the region.’ Journal of Folklore Research ’Eleni Kallimopoulou makes a significant scholarly contribution to the music culture of Greece... a useful addition to the increasing body of literature that deals with issues of music and identity.’ Ethnomusicology ’This is a major study... Kallimopoulou offers a fascinating account of the politics and aesthetics of this musical genre, as well as its social history... the wealth of the presented material, including transcriptions, photographs and two CDs, enriches Kallimopoulou's well framed arguments. This book will appeal to ethnomusicologists and to academics with an interest in popular culture of the Mediterranean.’ Journal of Popular Music 'This fine study of the urban folk music revival movement, the paradosiaka, recounts both the formation of its particular musical and professional milieu and its main practitioners, as well as the Greek sociopolitical and musical context since the 1970s.' Journal of Modern Greek Studies 'This work undoubtedly advances the knowledge of how music revivals materialize by shedding light on competing historical constructs, while resisting essentialism and straightforward aphorisms. Kallimopoulou's book is a recommended read for anyone interested in such musical phenomena within and beyond the ethnomusico