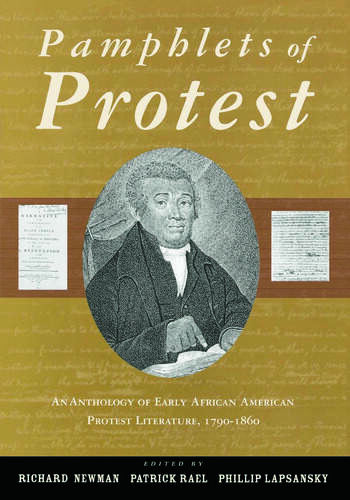 Pamphlets of Protest: An Anthology of Early African-American Protest Literature, 1790-1860

First Published in 2001. Routledge is an imprint of Taylor & Francis, an informa company.

"The editors have provided a distinct service in assembling [the Pamphlets] and suggesting ways to explore their meanings..This useful collection may inspire a new generation..." -- Journal of the Early Republic, Vol. 21 No. 3
"
Finding 'freedom in print' when it could be found in few places, African American pamphleteers chronicled America in a way largely forgotten. through the twenty-five pamphlets reprinted here and an excelent introduction by the editors, Pamphlets of Protestexposes a wold too rarely seen. Ideal for students, scholars, and all those seeking a broader vision of 'freedon' in America." -- Norrece T. Jones, Jr., author of,i.Slavery and Antislavery: Race and Freedom Struggles in the Making of America
"
This is a first-rate anthology of the pivitoal yet neglected tradition of early balck pamphlets. It provides both an illuminating cross-section of the documents themselves and a highly readable as well as insightful history of the black pamphlet tradition. An absolutely superb and engaging volume." -- Waldo Martin, Professor of History, University of California Berkeley
"
This brillantly edited collection will be of invaluable assistance to students of Amreican social and intellectual history at every level. The editors have performed a valuable service by making these documents available in this convenient volume, while the introduction is a model of creativity, imagination, and intellecutal rigot." -- Wilson J. Moses, Professor of History and Fellow in the Humanities, Pennsylvania State University
"
Spanning from the American Revolution through the Civil Wa, this volume brings together for the first time representative writings of the nation's most powerful and (too often)_most under-appreciated critics of slavery and white suppremacy. the editors supply such clear historical contexts for each of the documents, amd for the collection as a whole, that exerpts no less than beginners will find their encounters with this work to be truly illuminating. For students of African American history, and literature, PAMPHLETS OF PROTEST is simply is simply indispensable." -- James Brewer Stewart, James Wallace Professor of History, Macalester College
"Antebellum African American pamphlet literature broadened the scope and autonomy of black people's responses to their unfree position in US society. The writings reflect a wide variety of themes and convey the ideas set forth by such figures as Frederick Douglass, Martin Delany, David Walker, Robert Purvis, Alexander Crummell, Henry Highland Garnet, Maria H. Stewart, David Ruggles, and Mary Ann Shadd. There is insightful material on the role of black women, the underlying issue of racial equality, and on tactical debates as to how slavery was to be fought. Notable is the eloquence, born of a passion for freedom, of a number of these pamphleteers. No reader with any human sensibility can encounter the words of [these authors] without being moved... All in all, this collection is a valuable sourcebook for anyone interested in the leadership people of color provided in the struggle for their own freedom." -- H. Shapiro, emeritus, University of Cincinnati, Choice
"All in all, this collection is a valuable sourcebook for anyone interested in the leadership people of color provided in the struggle for their own freedom." -- Choice, September 2001

Pamphlets of Protest: An Anthology of Early African-American Protest Literature, 1790-1860