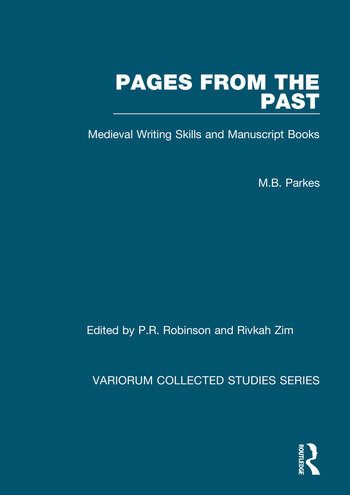 Pages from the Past: Medieval Writing Skills and Manuscript Books

In the present collection of articles by Malcolm Parkes two overarching concerns emerge: the palaeography of manuscript books in relation to what Parkes has previously called the 'grammar of legibility'; and the importance of considering the circumstances in which medieval books were produced, copied and read. The individual studies discuss the handwriting of individual scribes, and the evidence script can provide of the circumstances of a book's production, the effect of punctuation and layout of text on the reader's interpretation of a work, and the provision and production of books for communities of readers, both clerical and academic. From a discussion of the scribe of the Hereford Mappa Mundi to a comprehensive study of book provision in the medieval University of Oxford, a wealth of information is conveyed in these articles, now conveniently accessible in one volume, about books and their histories by one of the most knowledgeable of manuscript scholars today.

Contents: Introduction; Part I Scribes and Scripts: The Hereford Map: the handwriting and copying of the text; Richard Frampton: a commercial scribe c.1390-c.1420; Patterns of scribal activity and revisions of the text in early copies of works by John Gower; Archaizing hands in English manuscripts. Part II Punctuation: Latin autograph manuscripts: orthography and punctuation; Punctuation and the medieval history of texts; Medieval punctuation and the modern editor; Punctuation in copies of Nicholas Love's Mirror of the Blessed Life of Jesus. Part III Readers: RÃ¦dan, areccan, smeagan: how the Anglo-Saxons read; Folia librorum quaerere: medieval experience of the problems of hypertext and the index; Stephan Batman's manuscripts. Part IV Book Provision: History in books' clothing: books as evidence for cultural relations between England and the Continent in the 7th and 8th centuries; The compilation of the Dominican lectionary; The provision of books; Indexes.

'The collection is particularly welcome because the original places of publication are widely scattered... Medievalists generally have cause to thank the editors for their painstaking preparation of the materials in this volume and for equipping it properly with an Index of Manuscripts and a General Index.' Journal of the Early Book Society

Pages from the Past: Medieval Writing Skills and Manuscript Books