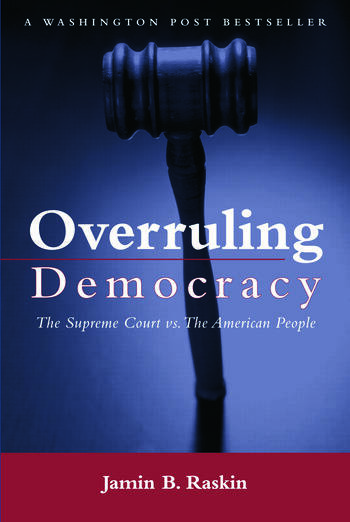 Overruling Democracy: The Supreme Court versus The American People

The Supreme Court has recently issued decisions announcing that citizens have neither a constitutional right to vote, nor the right to an education. Conservative judges have continually disavowed claims to any rights not specifically mentioned in the Constitution. In "Overruling Democracy, " celebrated law professor Jamin B. Raskin, argues that we need to develop a whole new set of rights, through amendments or court decisions, that revitalize and protect the democracy of everyday life. Detailing specific cases through interesting narratives, "Overruling Democracy" describes the transgressions of the Supreme Court against the Constitution and the people - and the faulty reasoning behind them -- and lays out the plan for the best way to back a more democratic system.

Jamin B. Raskin is Professor of Law at American University in Washington D.C. His articles have appeared in Slate, The Washington Monthly, The American Prospect, The Nation, The Washington Post, The Los Angeles Times and many other newspapers, journals and magazines.

"Jamin Raskin brilliantly shows how political and legislative democracy are being scandalously curtailed and undermined by the Supreme Court, which has become law unto itself. Not a counsel of despair, Overruling Democracy also explains how we the people--with a little courage--can reclaim our democracy." -- Robert Kuttner, co-editor, The American Prospect
"American democracy thrives because people like Jamin Raskin, an eloquent, thoughtful and provocative small-d democrat, insist on reminding us of our aspirations to equality and rule by the people. You may disagree with some of his ideas, as I do, and still come away refreshed and even electrified. The old issue was liberal judicial activism. The new issue is a conservative judicial activism that could constrain the ability of the democratic branches of our government to solve public problems. For liberals, Raskin says, 'it is time to let go of any lingering nostalgic enchantment with the Supreme Court.' He's right." -- E.J. Dionne, author of Why Americans Hate Politics and They Only Look Dead: Why Progressives Will Dominate the Next Political Era
"Jamin Raskin is in the forefront of progressive academics who bring specialized knowledge to bear on the large pressing issues of the day in a language that is broadly accessible. In Overruling Democracy he offers a critique of American law and politics that is impassioned yet thoughtful, polemical yet informative." -- Randall Kennedy, Professor, Harvard Law School
"Jamin Raskin offers a passionate vision of the Supreme Court as the guardian of participatory democracy in America. Even those who take a more restrained view of the role of judges will benefit from his powerful arguments and moral fervor." -- Jeffrey Rosen, Legal Affairs Editor, The New Republic
"This brilliantly argued and meticulously researched book both alarms and inspires. Raskin shows how the Supreme Court has used its own perverse version of judicial activism to attack our fundamental constitutional rights -- and he offers a vision for how to restore democracy to America. Overruling Democracy belongs on the reading list of anyone who takes citizenship seriously." -- Barbara Ehrenreich, author of Nickel and Dimed
"A gripping book about the Supreme Court's assault on the political rights of the people. This book is required reading for every citizen who cares about the fate of our democracy." -- John Sweeney, President of the AFL-CIO
"Raskin's groundbreaking suggestions for a democratic political reform movement provide the reader with a brighter vision for the future of the American governmental system." -- Congressman John Conyers, (D-Michigan), Democratic leader on the House Judiciary Committee
"This book is very interesting and thought provoking. It certainly provides an intricate and complex discussion of the author's concept of a progressive populist democracy and of the role of the Supreme Court in that vision." -- Mark C. Miller, The Law and Politics Review, Vol. 13 No. 8
"A brilliant exploration of how the Supreme Court has subverted democratic principles with its decisions in areas ranging from campaign finance to redistricting to the right to vote." -- Erwin Chemerinsky, Professor, University of Southern California Law School
"This provocative lawyer's brief challenges the ways in which constitutional decision making impedes participatory democracy in the United States...A smart, thorough, and proudly partisan plea for participatory democracy in the United States." -- Political Science Quarterly

Overruling Democracy: The Supreme Court versus The American People