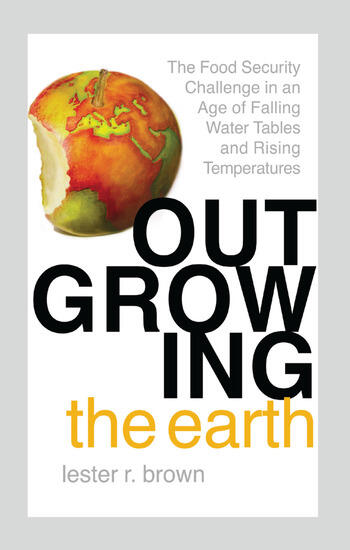 Outgrowing the Earth: The Food Security Challenge in an Age of Falling Water Tables and Rising Temperatures

Historically, food security was the responsibility of ministries of agriculture but today that has changed: decisions made in ministries of energy may instead have the greatest effect on the food situation. Recent research reporting that a one degree Celsius rise in temperature can reduce grain yields by 10 per cent means that energy policy is now directly affecting crop production. Agriculture is a water-intensive activity and, while public attention has focused on oil depletion, it is aquifer depletion that poses the more serious threat. There are substitutes for oil, but none for water and the link between our fossil fuel addiction, climate change and food security is now clear. While population growth has slowed over the past three decades, we are still adding 76 million people per year. In a world where the historical rise in land productivity has slowed by half since 1990, eradicating hunger may depend as much on family planners as on farmers. The bottom line is that future food security depends not only on efforts within agriculture but also on energy policies that stabilize climate, a worldwide effort to raise water productivity, the evolution of land-efficient transport systems, and population policies that seek a humane balance between population and food. Outgrowing the Earth advances our thinking on food security issues that the world will be wrestling with for years to come.

Lester R. Brown is President of Earth Policy Institute, and has been described as 'one of the world's most influential thinkers' by The Washington Post. He is widely known as the Founder and former President of the Worldwatch Institute, whose Board he now chairs. He launched the influential State of the World reports, which are now published in over 30 languages. Brown has been honoured with numerous prizes, including the MacArthur 'Genius' Fellowship, the United Nations Environment Prize, and Japan's Blue Planet Prize. He lives in Washington, DC.

Outgrowing the Earth: The Food Security Challenge in an Age of Falling Water Tables and Rising Temperatures