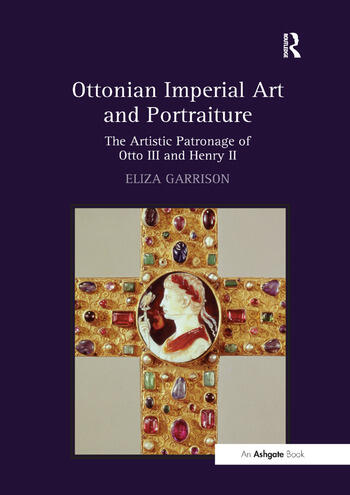 Ottonian Imperial Art and Portraiture represents the first art historical consideration of the patronage of the Ottonian Emperors Otto III (983-1002) and Henry II (1002-1024). Author Eliza Garrison analyzes liturgical artworks created for both rulers with the larger goal of addressing the ways in which individual art objects and the collections to which they belonged were perceived as elements of a material historical narrative and as portraits. Since these objects and images had the capacity to stand in for the ruler in his physical absence, she argues, they also performed political functions that were bound to their ritualized use in the liturgy not only during the ruler's lifetime, but even after his death. Garrison investigates how treasury objects could relay officially sanctioned information in a manner that texts alone could not, offering the first full length exploration of this central phenomenon of the Ottonian era.

'The rare publication of an English monograph on Ottonian art is always cause for celebration. Still too little known, the art produced in the Germanic realms in the forty years on either side of 1000 CE is among the most sumptuous and complex of the entire Middle Ages. Although not a survey of the period, Eliza Garrison’s Ottonian Imperial Art and Portraiture is a fine demonstration of this claim, and Ashgate is to be congratulated on producing a handsome book whose mostly full-page illustrations do justice to the beauty and power of the objects under discussion.' caa.reviews

'... an engaging and thoughtful analysis of the artistic patronage of the Holy Roman Emperors Otto III and Henry II... it will no doubt delight readers with its lucid presentation of some of the most complex and beautiful treasures to survive from the tenth and eleventh centuries. Highlights, to name just a few, include the Lothar Cross, the Gospels of Otto III, the Pericopes of Henry II, and the Bamberg Star Mantle; these works are often included in surveys, but too rarely discussed in depth. This new book is thus greatly welcome for two reasons: it engages with important objects that deserve more discussion, and it presents a well-written, up-to-date, yet accessible overview of scholarship on Ottonian treasury art... this is a welcome addition to the field of Ottonian art history, a subject that is finding increasing attention among North American scholars, and will do so even more thanks to the wonderful images, helpful bibliography, and engaging discussions presented in this book.' The Medieval Review

'Rarely does one encounter a study that attempts to associate this body of political art with the hard realities of contemporary politics. Garrison does not ignore the formal questions with which medieval art historians have been typically concerned, but such questions are supplemented by her methodology, which combines considerations of iconography, liturgy, political thought and source analyis, with a sense of the pragmatic aims and methods of Ottonian rulership.' Early Medieval Europe