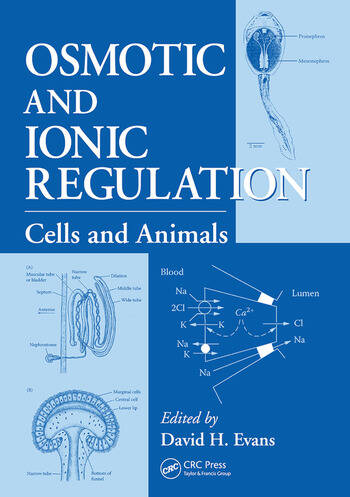 In the 40 years since the classic review of osmotic and ionic regulation written by Potts and Parry, there has been astonishing growth in scientific productivity, a marked shift in the direction and taxonomic distribution of research, and amazing changes in the technology of scientific research

"…It is indicative of the growth of the subject that as time passes the number of authors needed to review the subject grows exponentially. The time is ripe for a new survey of the subject and Dr. Evans is to be congratulated on the expert crew that he has recruited."

—From the foreword by W.T.W. Potts

Osmotic and Ionic Regulation: Cells and Animals not only fills a gap in the literature, but delineates the new approaches, outlooks, and findings that define how the field has changed. Providing the first comprehensive summary of the fundamentally important mechanisms of ionic and osmotic regulation in 40 years, it ties the new findings to the older work of Potts and Parry.

This book, written by accepted leaders in this field dealing with the ecology to the molecular biology of the processes and the taxa, provides background information in a broad range of disciplines such as zoology, evolutionary biology, physiology, ichthyology, aquaculture, marine biology, entomology, herpetology, avian biology, human nephrology, conservation biology, and pharmacology.

David H. Evans, PhD , is professor emeritus of Zoology at the University of Florida. Dr. Evans received his AB in Zoology from DePauw University, Indiana, in 1962 and his PhD in Biological Sciences from Stanford University, California, in 1967. He held postdoctoral positions in the Biological Sciences Department of the University of Lancaster, United Kingdom, and the Groupe de Biologie Marine du C.E.A., Villefranche-sur-mer, France, in 1967 and 1968. In 1969, he joined the Department of Biology at the University of Miami, Florida, as assistant professor and served as professor and chair from 1978 to 1981, when he became professor of Zoology at the University of Florida. He served as chair of that department from 1982 to 1985 and 2001 to 2006. He also held affiliate professorships in the departments of Fisheries and Aquatic Sciences and Physiology and Functional Genomics at the University of Florida. Dr. Evans served as Director of the Mount Desert Island Biological Laboratory (MDIBL), Salisbury Cove, Maine, from 1983 to 1992, as well as Director of the MDIBL’s Center for Membrane Toxicity Studies from 1985 to 1992. He served on a White House Office of Science and Technology Policy Acid Rain Peer Review Panel from 1982 to 1984 and on the Physiology and Behavior Panel of the National Science Foundation from 1992 to 1996. He is a member of the Society for Experimental Biology, Sigma Xi, and the American Physiological Society. He has served on the editorial boards of The Biological Bulletin , Journal of Experimental Biology , Physiological and Biochemical Zoology , Journal of Experimental Zoology, and Journal of Comparative Physiology . He is currently serving on the editorial board of the American Journal of Physiology (Regulatory, Comparative, Integrative Physiology) . Dr. Evans received the University of Miami Alpha Epsilon Delta Premedical Teacher of the Year Award in 1974, the University of Florida and College of Liberal Arts and Sciences Outstanding Teacher Awards