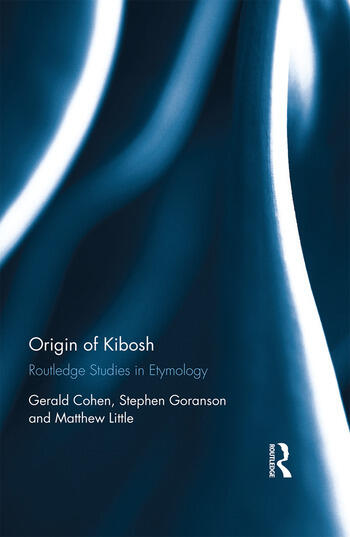 This is an etymological study of the origins of the word kibosh, which has long been one of the great mysteries of the English language. Unconvincing derivations have been suggested from Yiddish to Gaelic and Italian, and thus far consensus among lexicographers has leaned toward referencing the word as ‘origin unknown’.

In this study, the authors present convincing and important new evidence in favour of the derivation of kibosh from the word for a fearsome Middle Eastern whip, known as the kurbash.

This monograph is one of the most significant etymological works directed at a single phrase. It is the gold standard on deep-drill, focused and exhaustive single-word lexicography and will be of interest to lexicographers and linguists in the relevant fields.

CHAPTER 4: Spread of put the kibosh on from Cockney

Appendix #4: Political complexities in Britain of the early 1830s

Appendix #5: Notes & Queries items on a Yiddish origin of

Appendix #6: Two pictures illustrating use of the kurbash

Gerald Cohen is Professor of German and Russian, with a research specialty in etymology, at Missouri University of Science and Technology, USA.

works in the library of Duke University, where he also earned a doctorate.

is Associate Professor of English at Mississippi State University.