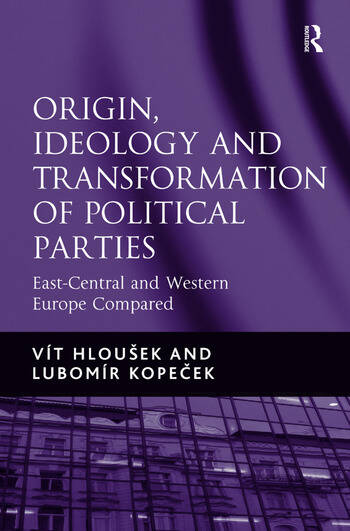 Two decades have passed since the transition to democracy began in Eastern Europe. Today, West and East-Central European countries share a common political space - the European Union. This has created a fascinating opportunity for analysis of the similarities and differences between these countries. Here, VÃ­t HlouÅ¡ek and LubomÃ­r Kopecek critically apply the party-families approach to political parties in the Czech Republic, Hungary, Poland, Slovakia, and Slovenia. With chapters devoted to social democrats, greens, the far right and left amongst many others, this book charts the parties' origins, ideologies, and international ties alongside their Western European counterparts. By examining the political relevance of different party families, HlouÅ¡ek and Kopecek are able to assess the validity of this typology in the analysis of the transformation of political parties in this region. Detailed analysis coupled with an innovative application of the party families approach, makes this essential reading for students of party politics.

'Despite the wealth of research, the question of why party system development has been so turbulent and uneven in the region is still unsettled. With their new book, VÃ­t HlouÅ¡ek and LubomÃ­r Kopecek offer a welcome addition to the debate, providing a font of information on political parties in the Czech Republic, Slovakia, Hungary, Poland, and Slovenia. ... With this highly descriptive approach, the authors eschew the conventional political science model of explicitly setting out an empirical "puzzle" and then adjudicating between a limited set of clearly outlined rival causal hypotheses... this book is in its own understated way advancing a quite radical claim. Certainly it is not the picture that one finds in much of the rest of the literature on the region's party systems... there is much to laud in this needed empirical update on the contours of east central Europe's party systems.' Slavic Review 'The dominant strength of this work is its argument for compatibility of parties across the European continent which helps to diminish the over-focus that persists in political science between Western and 'post-communist' Europe. The cases of Poland, the Czech Republic, Slovakia, Hungary and Slovenia are carefully chosen, and the authors take care not to include former Soviet Union republics or the majority of the Balkans where convergence with Western European party models has yet to occur... Ultimately this research encourages more studies similar to this one. This book is an essential read for political party scholars and useful to all scholars of Central European studies.' Political Studies Review