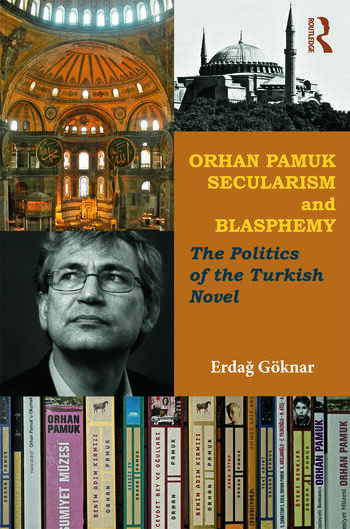 Orhan Pamuk, Secularism and Blasphemy: The Politics of the Turkish Novel

Orhan Pamuk, Secularism and Blasphemy is the first critical study of all of Pamuk’s novels, including the early untranslated work.

In 2005 Orhan Pamuk was charged with "insulting Turkishness" under Article 301 of the Turkish penal code. Eighteen months later he was awarded the Nobel Prize. After decades of criticism for wielding a depoliticized pen, Pamuk was cast as a dissident through his trial, an event that underscored his transformation from national literateur to global author. By contextualizing Pamuk’s fiction into the Turkish tradition and by defining the literary and political intersections of his work, Orhan Pamuk, Secularism and Blasphemy rereads Pamuk's dissidence as a factor of the form of his novels.

This is not a traditional study of literature, but a book that turns to literature to ask larger questions about recent transformations in Turkish history, identity, modernity, and collective memory. As a corrective to common misreadings of Pamuk’s work in its international reception, Orhan Pamuk, Secularism and Blasphemy applies various analytical lenses to the politics of the Turkish novel, including gender studies, cultural translation, historiography, and Islam. The book argues that modern literature that confronts representations of the nation-state, or devlet, with those of Ottoman, Islamic, and Sufi contexts, or din, constitute "secular blasphemies" that redefine the politics of the Turkish novel.

Concluding with a meditation on conditions of "untranslatability" in Turkish literature, this study provides a comprehensive and critical analysis of Pamuk’s novels to date.

Part I: Tropes of "Turkishness" from Islam to State  1. Literary Revisions of the Secular Modern  2. The Untranslated Novels of a Nobel Laureate  Part II: The Archive of Ottoman Istanbul  3. A Voice from the Ottoman Archive  4. Reimagining the Ottoman Legacy  Part III: The Literary Politics of the Secular-Sacred  5. Political Parody from Coups to Conspiracy  6. Novelizing Secular Sufism Conclusion The Blasphemies of 'turning Turk'

Erdağ Göknar is Assistant Professor of Turkish Studies at Duke University and the award-winning translator of Orhan Pamuk’s My Name is Red. He holds a Ph.D. in Near and Middle Eastern studies and has published various critical articles on Turkish literary culture. He is also the translator of A.H. Tanpınar’s novel of Turkish modernity A Mind at Peace and co-editor of Mediterranean Passages: Readings from Dido to Derrida (North Carolina, 2008).

Orhan Pamuk, Secularism and Blasphemy: The Politics of the Turkish Novel