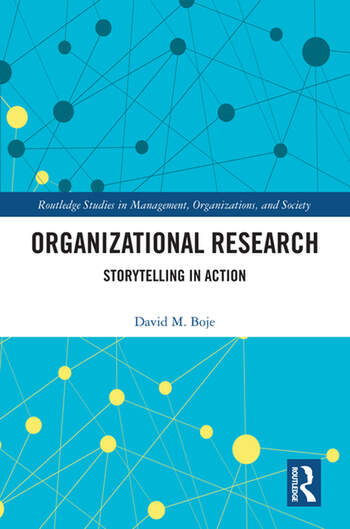 ‘Organizational research methods’ (ORM) are making an ontological turn by studying the nature of Being, becoming, and the meaning of existence in the world. For example, without ontology, there is no ‘ground’ and no ‘theory’ in Grounded Theory (GT). This book explores ten ways to develop fourth wave GT that is grounded and theory. 1st wave GT commits inductive fallacy inference, 2nd wave GT bandaids it with positivistic content coding. 3rd wave GT turns to social constructivism, but this leaves out the materiality and ecology of existence. The first three waves do not address falsification or verification. There is another theme. Qualitative research methods is a discipline craft, not mere science or something that automated text analysis software can displace. Quantiative narrative analysis (QDA) is one more way to colonize and marginalize indigenous ways of knowing (IWOK). Without an ontological turn, its the death of storytelling predicted by Walter Benjamin and Gertrude Stein predicted. The good news is Western Empirical Science is beginning to listen to IWOK-Native Science experiential living story method of relations not only to other humans but to other animals, plants, to living air, water, and earth in living ecosystem of an enchanted world

There is a gap in the qualitative research methodology practices and comprehensive advanced approaches causing a split between practice and theory. So called Grounded Theory (inductive positivism) .

Organizational Research: Storytelling in Action is about how to conduct ten kinds of ontological Research Methods and conduct their interpretative analyses, for organization studies, in an ethically answerable way. It is aimed at people who want a more ‘advanced’ treatment than available in so-called Grounded Theory or automated narrative analysis books.

Primer on Spirals and their Multiplicities

Part I: Hegel’s Phenomenology of Spirit

Part II: Slavoj Žižek’s coubling of Negation of the Negation with Multiplicities

Part IV: An Wal-Mart Example of Negation of the Negation with Multiplicity

Crossing the Stream: Ten Ways Numeric- and Qualitative-Multiplicity Storytelling are