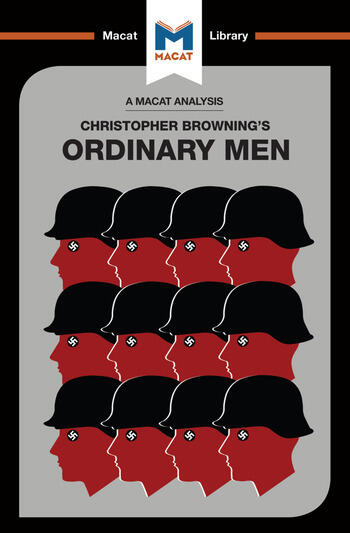 Of all the controversies facing historians today, few are more divisive or more important than the question of how the Holocaust was possible. What led thousands of Germans – many of them middle-aged reservists with, apparently, little Nazi zeal – to willingly commit acts of genocide? Was it ideology? Was there something rotten in the German soul? Or was it – as Christopher Browning argues in this highly influential book – more a matter of conformity, a response to intolerable social and psychological pressure?

Ordinary Men is a microhistory, the detailed study of a single unit in the Nazi killing machine. Browning evaluates a wide range of evidence to seek to explain the actions of the "ordinary men" who made up reserve Police Battalion 101, taking advantage of the wide range of resources prepared in the early 1960s for a proposed war crimes trial. He concludes that his subjects were not "evil;" rather, their actions are best explained by a desire to be part of a team, not to shirk responsibility that would otherwise fall on the shoulders of comrades, and a willingness to obey authority.

Browning's ability to explore the strengths and weaknesses of arguments – both the survivors' and other historians' – is what sets his work apart from other studies that have attempted to get to the root of the motivations for the Holocaust, and it is also what marks Ordinary Men as one of the most important works of its generation.

Who was Christopher R. Browning?

What does Ordinary Men: Reserve Police Batallion 101 and the Final Solution in Poland Say?

Why does Ordinary Men: Reserve Police Batallion 101 and the Final Solution in Poland Matter?

Dr James Chappel completed his PhD in Modern History at Columbia University and is currently teaching at Duke University. His work focuses on the intellectual, political and Religious History of Modern Europe.

Dr Thomas Stammers is lecturer in Modern European history at Durham University, where he specialises in the Cultural History of France in the age of revolution. He is the author of Collection, Recollection, Revolution: Scavenging the Past in Nineteenth-Century Paris. Dr Stammers’s research interests include a wide range of historiographical and theoretical controversies related to eighteenth and nineteenth-century Europe.