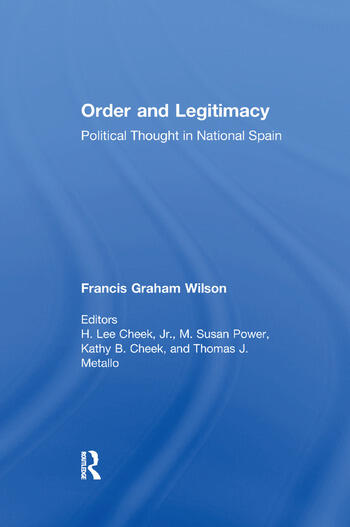 A growing body of readers is rediscovering Francis Graham Wilson's tremendous contribution to the study of politics and humane learning. In this volume, he offers an extensive assessment of the nature of politics and the search for order in Spanish politics, concentrating on the central figures who defended the Church and communities during the Spanish Civil War.

The book argues for the uniqueness of Spain among the other countries of Europe. For Wilson, the most salutary attribute of Spanish politics is found in the assemblage of smaller groupings of the citizenry within the larger society in communities; and it is in the smaller association that the most important aspects of moral, social and political life were nurtured. Part 1 includes assessments of three eminent Spanish traditionalists, Juan Donoso Cortés, Jaime Balmes, and Menéndez Pelayo, as well as studies of central figures from the period of the Spanish Civil War José Antonio and Ramiro de Maeztu. The final chapters are taken from an unpublished book-length manuscript, "An Anchor in the Latin Mind," that Wilson had completed at the time of his death in 1976, and was recently discovered by the editors.

For Wilson, Latin thinkers possess advantages others do not a political realism that can be reinvigorated. The recovery of Spanish traditionalism, according to this book, is dependent upon a return to the self-understanding of the ordering principles of Spanish politics and society. Wilson's affirmation of a Spanish traditionalist inheritance during his lifetime encouraged a return to authentic popular rule and a greater appreciation of Spanish achievements in politics and the moral life.

1. The Resurgence of Spanish Tradition

Part 2: An Anchor in the Latin Mind

Francis Graham Wilson (1901-1976) was an eminent political scientist who taught at the University of Washington and the University of Illinois. He is best known for establishing a historical theory of public opinion as distinct from the methodology. He is the author of numerous articles and books on public opinion, including The American Political Mind and The Case for Conservatism.

H. Lee Cheek, Jr., is Professor of Political Science and Religion at the University of North Georgia, and a senior fellow of the Alexander Hamilton Institute. His previous books include Political Philosophy and Cultural Renewal, Order and Legitimacy, and Calhoun and Popular Rule, among other works.

M. Susan Power is Professor of Political Science at Arkansas State University. Her books include Before the Convention: Religion and the Founders and Jacques Maritain.

Kathy B. Cheek is adjunct instructor at Lee University, a choreographer and teacher of dance.

Thomas J. Metallo is Assistant Professor of Political Science at Lee University and a specialist in Spanish and Latin politics.