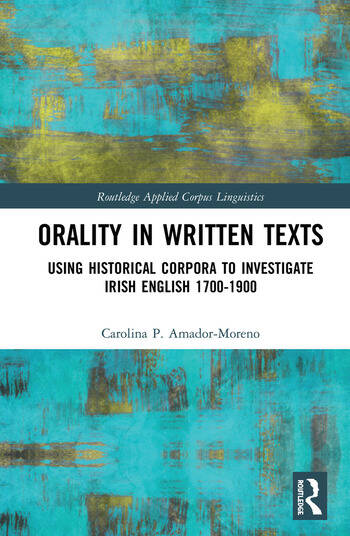 Orality in Written Texts provides a methodologically and theoretically innovative study of change in Irish English in the period 1700-1900. Focusing in on a time during which Ireland became overwhelmingly English-speaking, the book traces the use of various linguistic features of Irish English in different historical contexts and over time. This book:

With direct relevance to corpus-based literary studies as well as the exploration of hybrid, modern-day text forms, Orality in Written Texts is key reading for advanced students and researchers of corpus linguistics, varieties of English, language change and historical linguistics, as well as anyone interested in learning more about Irish history and migration.

Chapter 1. Introduction: opening windows into the past

Chapter 2. The historical context of the letters

Carolina P. Amador-Moreno is Senior Lecturer in the Department of English and Director of the Research Institute for Linguistics and Applied Languages (LINGLAP) at the University of Extremadura, Spain.