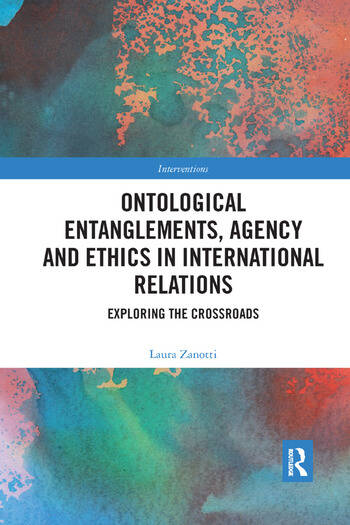 While the relevance of ontological commitments for epistemology and methodology in International Relations have been the subject of growing debate for several years, the implications for ethics and political agency of embracing an ontology of entanglement have remained unexplored. This work focuses on the importance of addressing the ontological and epistemological assumptions of the discipline of International Relations.

There is increased awareness of the limits of abstract principles as ways of adjudicating real life political and ethical choices regarding International Intervention and international development for both practitioners and scholars. The work challenges  IR prevailing ontological imaginaries rooted upon Newtonian physics and argues that non-substantialist ontological positions nurture a political ethos that privileges ‘modest’ engagements of practical solidarity and weights political choices with regard to the consequences and distributive effects they may produce in the context where they are made rather than based upon their universal normative aspirations. While the book is firmly rooted in metatheory, Zanotti also highlights the easiness with which political failures are dismissed as unintended consequences and argues that the current crisis in Syria, and genocides in Srebrenica and Rwanda have shown that advocating abstract ethical principles, be they the Responsibility to Protect, impartiality, or following rules can lead to disaster and can foster violent and exclusionary practices. She also exemplifies how an alternative ethos can be practiced through the example of an international NGO in Haiti.

Highlighting the need for critically re-thinking the way we conceptualize political agency and validate ethics, this work will be of interest to scholars of International Relations theory, ethics and critical security studies.

1. Questioning substantialism in unsuspected places: anarchy, empire and the power of ideas.

3. Quantum entanglements: intra agential agency and the ethos of practice.

5. Entangled norms: archives, the non-transparency of meaning and ethics.

6. Intra-agential realism and the relevance of International Relations for practice.

9. Intra-agential agency, an ethos of responsibility and practical solidarity: providing medical care to the poor.

Laura Zanotti is Associate Professor at Virginia Tech, USA. Prior to joining academia Zanotti has worked  in peacekeeping and peacebuilding at the United Nations.