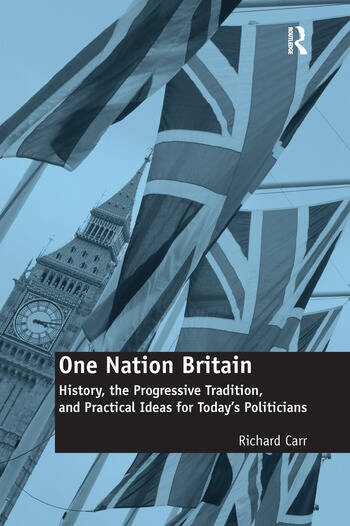 One Nation Britain: History, the Progressive Tradition, and Practical Ideas for Today’s Politicians

What is One Nation politics? What has it been, and what should be it be today? Since Ed Miliband’s speech at the 2012 Labour Party Conference these questions have been much asked, but not so often clearly answered. Outlining the historical context, and offering suggestions for contemporary thinkers, this comprehensive overview shows how all three major UK political parties have made a significant contribution to the One Nation agenda over the past century and a half. Re-asserting the One Nation tradition inherent in interventionist liberals like Keynes and Lloyd George, it encourages us to look beyond reformist high Tory politicians such as Benjamin Disraeli and sketches out precedents for current politicians in areas such as house building, local government, the living wage, a financial transaction tax, and the welfare state. Providing an accessible guide to the One Nation ideal, Richard Carr gives those of all political persuasions some food for thought whilst pointing the way for future policy making.

Richard Carr is a Research Fellow in History and a member of the Labour History Research Unit at Anglia Ruskin University. His latest book, Veteran MPs and Conservative Politics in the Aftermath of the Great War (Ashgate, 2013), surveys the post-1918 careers of ’One Nation’ Tories such as Harold Macmillan and Anthony Eden who had fought in the First World War before assuming political prominence.

’This is an important work which throws up some interesting lessons from history. Is Conservatism best placed to deliver upon a One Nation agenda? The thrust of this book suggests that, despite the legacy of One Nation Tories� like Disraeli and Baldwin, it is not. Labour, on the other hand, can read with interest some of the precedents highlighted here - including George Lansbury, David Lloyd George, and even the radical Harold Macmillan of the 1930s. Manifesto writing is drawing ever nearer for all parties - books such as this play a crucial role in opening up minds, highlighting previous One Nation consensus, and encouraging the new thinking our country needs.’ Jon Cruddas MP, Labour Policy Review Co-ordinator, UK ’In this book, Richard Carr highlights the historical origins of many contemporary economic debates. He shows how ideas such as such as a living wage, switching public spending from welfare to supporting growth, wealth taxes and the financial transaction tax have all had high-level support in political circles in the past. Given such progressive policies were backed by figures from across the political spectrum, including Crosland, Lloyd George and Macmillan, then a consensus for reform may be wider than our current discourse suggests. There is much to ponder here for politicians of all persuasions.’ Tony Dolphin, Associate Director for Economic Policy, Institute for Public Policy Research, UK ’This work shows that investment in national infrastructure, a living wage, and a politics that emphasises jobs for all has significant historical precedent - in all parties. This book takes us from Lloyd George speaking in East London for small levies on extreme wealth, to Macmillan writing in Stockton in the 1930s on the problems of contemporary capitalism such as low wages, and a significant regional divide. And it shows how all wings of the Labour Party have contributed to this story - not just in the major achievements of the 1945 government,

One Nation Britain: History, the Progressive Tradition, and Practical Ideas for Today’s Politicians