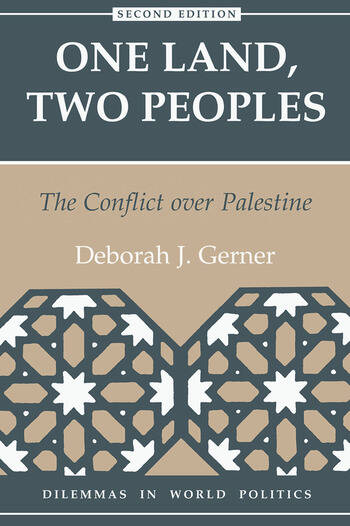 One Land, Two Peoples: The Conflict Over Palestine

The Israeli-Palestinian conflict has once again captured world attention?this time because of the coming together of Arafat and Rabin as a result of the secret Oslo Accords and the reactions ensuing from this historic?and challenging?event. One Land, Two Peoples, originally published in the throes of the intifada, now brings its wide readership up to date on progress in the peace negotiations, beginning with their breakdown and subsequent stalemate following the Gulf War and the ensuing renaissance stimulated by the Oslo Accords. One Land, Two Peoples describes the Israeli-Palestinian dynamic as a conflict ?rooted in its own reality''?a struggle that, despite its international dimensions, must be resolved by the principals themselves. Throughout, Deborah Gerner shows how what is happening today is steeped in the history of the region and illustrates ways that theories of international relations can help address questions about the politics of national identity and the roles of economics, culture, religion, and outside actors in fueling or quelling the conflict.In its first edition, this text was commended for its clarity, conciseness, and balanced viewpoint. It has been used in college classrooms ranging from international relations and foreign policy to Middle East studies, religious studies, peace studies, history, English, and many more. This new and fully revised second edition includes updated maps, tables, photos, illustrations, media resources, chronology, and glossary, all of which add to the superb text presentation.

One Land, Two Peoples: The Conflict Over Palestine