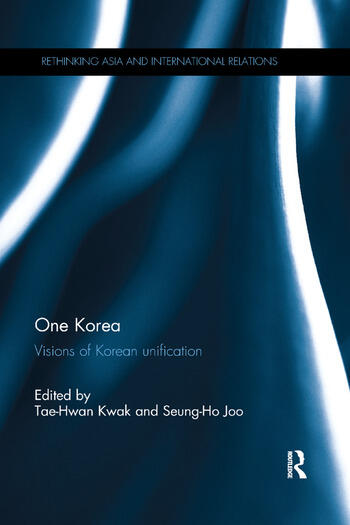 One Korea: Visions of Korean unification

On the Korean peninsula, there exist two sovereign states—the Republic of Korea (ROK or South Korea) and the Democratic People’s Republic of Korea (DPRK or North Korea)—both of whom hold separate membership at the United Nations. This book discusses the construction of "one Korea" and highlights the potential benefits of unification for the Koreans and the international community. Arguing that Korean unification is intrinsically international in nature, the authors outline how the process and outcome would impact upon the policies of the four major powers—the U.S., China, Russia, and Japan. In addition, the authors highlight the possible far-reaching repercussions of unification on the political and economic dynamics of Northeast Asia. Making a case for the two Koreas and interested powers to plan and orchestrate their acts for sustained peace and gradual unification on the Korean peninsula, this book examines the Korean question and the related issue of peace building in Northeast Asia from a global perspective. It will be of interest to students and scholars researching politics and international relations.

3. U.S. Policy toward Korean Unification and the Policies of the ROK and the DPRK

4. The Future Vision of a Unified Korean Peninsula: A U.S. Perspective

5. Obama’s Policy Toward the Korean Peninsula: A Korean Perspective

6. Maintaining the Status Quo or Promoting the Reunification of the Korean Peninsula?:

8. The Future Vision for a United Korean Peninsula: A Russian Perspective

Seung-Ho Joo is Professor of Political Science at the University of Minnesota, Morris, USA.

One Korea: Visions of Korean unification