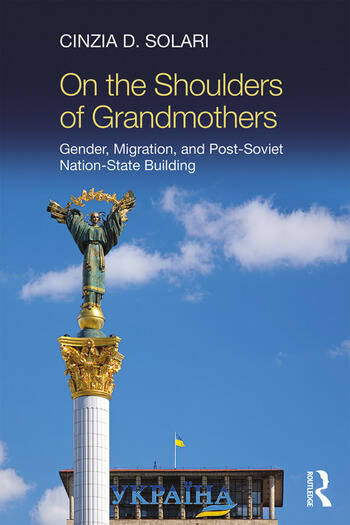 On the Shoulders of Grandmothers: Gender, Migration, and Post-Soviet Nation-State Building

On the Shoulders of Grandmothers is a global ethnography of Ukrainian transnational migration. Gendered migrant subjectivities are a key site for understanding the production of neoliberal capitalism and Ukrainian nation-state building, a fraught process that places Ukraine precariously between Europe and Russia with dramatic implications for the political economy of the region. However, processes of gender and migration that undergird transnational nation-state building require further attention. Solari compares two patterns of Ukrainian migration: the "forced" exile of middle-aged women, most grandmothers, to Italy and the "voluntary" exodus of families, led by the same cohort of middle-aged women, to the United States. In both receiving sites these migrants are caregivers to the elderly.

Using in-depth interviews and ethnographic data collected in three countries, Solari shows that Ukrainian nation-state building occurs transnationally. She examines the collective practices of migrants who are building the "new" Ukraine from the outside in and shaping both Italy and the United States as well. The Ukrainian state, in order to fulfil its First World aspirations of joining Europe and distancing itself from all things Soviet, is pursuing a gendered reorganization of family and work structures to achieve a transition from socialism to capitalism. This has created a labor force of migrant grandmothers who carry the new Ukraine on their shoulders. Solari shows that this post-Soviet economic transformation requires a change in the moral order as migrant women struggle to understand how to be "good" mothers and grandmothers and men join women in attempts to teach their children to be successful and honorable people, now that the social rules have drastically changed.

Looking at individual migrant women and men and their families in Ukraine allows us to see the production of neoliberal capitalism and new nationalism from the ground up and the outside in for a region that promises to be a flashpoint in our century.

Notes on Transliteration and Participants

1: Markets, Moralities, and Motherhood in Transition

2: Italy’s Context of Reception and Connections to Ukraine

3: Narratives from the "Gulag"

Lydmyla: A Family Aspiring to be European

5: Narratives from the "Promised Land"

Viktoria: Married to the U.S. State

Dariya: Discovering my Capitalist "I" in the United States

Cinzia D. Solari is Assistant Professor of Sociology at the University of Massachusetts Boston. Her papers on gender, migration, and nationalism have been published in journals such as Gender & Society, The Journal of Ethnic and Migration Studies, and The American Behavioral Scientist.

On the Shoulders of Grandmothers: Gender, Migration, and Post-Soviet Nation-State Building