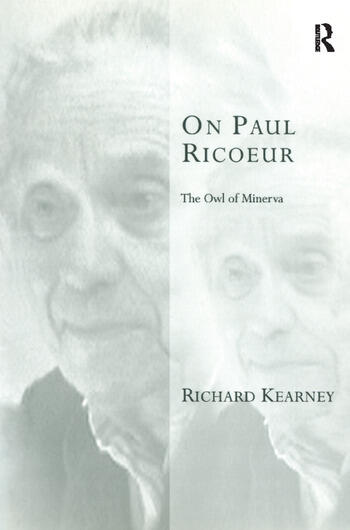 On Paul Ricoeur: The Owl of Minerva

Paul Ricoeur is one of the giants of contemporary continental philosophy and one of the most enduring and wide-ranging thinkers in the twentieth century, publishing major works ranging from existentialism and phenomenology to psychoanalysis, politics, religion and the theory of language. Richard Kearney offers a critical engagement with the work of Ricoeur, beginning with a general introduction to his hermeneutic philosophy. Part one explores some of the main themes in Ricouer's thought under six headings: phenomenology and hermeneutics; language and imagination; myth and tradition; ideology and utopia; evil and alterity; poetics and ethics. The second part comprises five dialogical exchanges which Kearney has conducted with Ricoeur over the last three decades (1977-2003), charting and explaining his intellectual itinerary. This book is aimed at a broad student readership as well as the general intelligent reader interested in knowing more about one of the most enduring major figures in contemporary continental philosophy.

Contents: Introduction: Ricoeur's philosophical journey; Part 1: Between phenomenology and hermeneutics; Between imagination and language; Between myth and tradition; Between ideology and utopia; Between good and evil; Between poetics and ethics. Part 2: Myth as the bearer of possible worlds; The creativity of language; Universality and the power of difference; Imagination, testimony, and trust; On life stories. Conclusion; Select bibliography of works by Paul Ricoeur; Index.

'Richard Kearney has become our surest guide to the import of Paul Ricoeur for our period. Ricoeur's enormous range and creativity is matched in this volume by Richard Kearney's own in this masterful study.' David Tracy, Professor of Divinity, University of Chicago, USA 'This eloquent study of Paul Ricoeur on history, at once comprehensive and imaginative, instructs us not only on a topic central to Ricoeur's thought throughout his career but deftly guides us into the depths of history itself.' Edward S. Casey, Distinguished Professor of Philosophy, State University of New York at Stony Brook. '[Kearney] does a beautiful job of explaining many of the key concepts, transitions, and conclusions of Ricoeur's philosophy... Clearly one of the very best explanations of Ricoeur's work, this book should be required reading for graduate students interested in the work of one of France's most prominent philosophers. Advanced undergraduates will benefit from it too... Highly recommended.' Choice 'Richard Kearney has been a very well known interpreter of Ricoeur's work for several years. In his book on Paul Ricoeur's philosophy, he explores his hermeneutic philosophy, starting with Ricoeur's specific modification of phenomenology... a sound commentary and therefore useful introduction to Ricoeur's hermeneutic philosophy...' www.arsdisputandi.org 'Kearney's thoughtful discussion reveals the relevance of Ricoeur's inter-subjective approach to hermeneutics for students of utopian thought and movements... the synthetic scope of Kearney's discussion, the clarity of his interpretive analysis, and the carefully chosen interviews, are a fitting tribute to the daunting breadth of Ricoeur's thought, and it raises pointed questions about utopianism, most notably the dialectic between traditions, critique, and utopian innovation.' Utopian Studies ’Readers looking for further discussion with Paul Ricoeur will appreciate On Paul Ricoeur: The Owl of Minerva, which includes a ser

On Paul Ricoeur: The Owl of Minerva