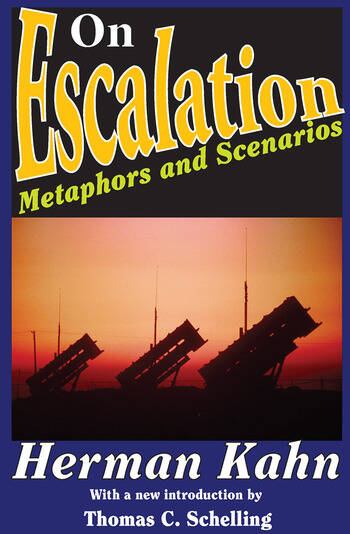 On Escalation: Metaphors and Scenarios

In this widely discussed and influential book, Herman Kahn probes the dynamics of escalation and demonstrates how the intensification of conflict can be depicted by means of a definite escalation ladder, ascent of which brings opponents closer to all-out war. At each rung of the ladder, before the climb proceeds, decisions must be made based on numerous choices. Some are clear and obvious, others obscure, but the options are always there.

Thermonuclear annihilation, says Kahn, is unlikely to come through accident; but nations may elect to climb the ladder to extinction. The basic material for the book was developed in briefings delivered by Kahn to military and civilian experts and revised in the light of his findings of a trip to Vietnam in the 1960s. In On Escalation he states the facts squarely. He asks the reader to face unemotionally the terrors of a world fully capable of suicide and to consider carefully the alternatives to such a path.

In the never-never land of nuclear warfare, where nuclear incredulity is pervasive and paralyzing to the imagination even for the professional analyst, salient details of possible scenarios for the outbreak of war, and even more for war fighting, are largely unexplored or even unnoticed. For scenarios in which war is terminated, the issues and possibilities of which are almost completely unstudied, the situation is even worse. Kahn's discussion throws light on the terrain and gives the individual a sense of the range of possibilities and complexities involved and are useful.

On Escalation: Metaphors and Scenarios