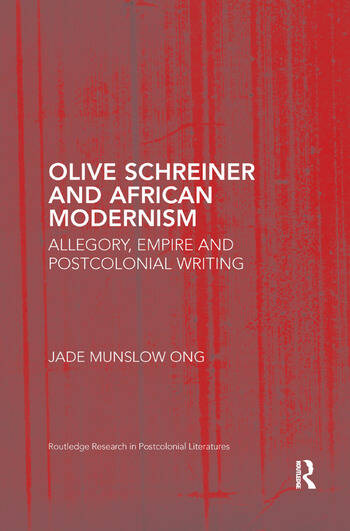 This book works across established categories of modernism and postcolonialism in order to radically revise the periods, places, and topics traditionally associated with anti-colonialism and aesthetic experimentation in African literature. The book is the first account of Olive Schreiner as a theorist and practitioner of modernist form advancing towards an emergent postcolonialism. The book draws on and broadens discussions in and around the blossoming field of global modernist studies by interrogating the conventionally accepted genealogy of development that positions Europe and America as the sites of innovation. It provides an original examination of the relationships between metaphor, postcolonialism, and modernist experimentation by showing how politically and aesthetically innovative African forms rely on allegorical structures, in contrast to the symbolism dominant in Euro-American modernism. An original theoretical concept of the role of primitivism and allegory within the context of modernism and associated critical theory is proposed through the integration of postcolonial, Marxist, and ecocritical approaches to literature. The book provides original readings of Schreiner’s three novels, Undine, The Story of An African Farm, and From Man to Man, in light of the new theory of primitivism in African literature by directly addressing the issue of narrative form. This argument is contextualised in relation to the work of other Southern African authors, in whose writings the impact of Schreiner’s politics and aesthetics can be traced. These authors include J.M. Coetzee, Nadine Gordimer, Doris Lessing, Solomon T. Plaatje, and Zoe Wicomb, amongst others. This book brings the most current debates in modernist studies, ecocriticism, and primitivism into the field of postcolonial studies and contributes to a widening of the debates surrounding gender, race, empire, and modernism.

Allegory and Animals in Undine: A Queer Little Child

Primitivist Modernism, Anti-Imperialism and The Story of An African Farm

Evolution, Gender and Race in From Man to Man (Or Perhaps Only…)

Jade Munslow Ong is Lecturer in Nineteenth-Century Literature at the University of Salford, UK.