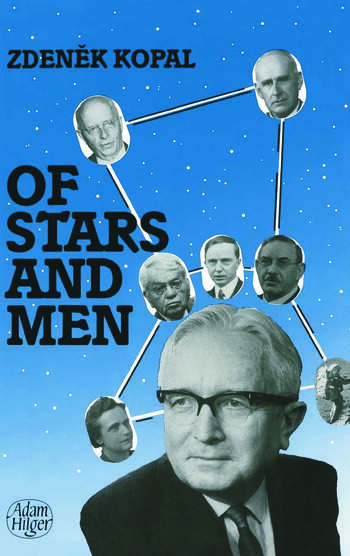 Of Stars and Men: Reminiscences of an Astronomer

The twentieth century has been a remarkable epoch in the affairs of men, and this is no less true of astronomy, at once the oldest and most modern of the sciences. Sky watchers at the beginning of the century measured positions and predicted celestial motions in faithful but uninspired homage to the Muse Urania; nowadays, their descendents call on all the resources of modern science to probe the nature and evolution of a bewildering range of celestial objects. Man has even set out to call personally on his nearest neighbours in space. Professor Zdenek Kopal has lived and practised astronomy throughout this efflorescence of his subject. Born in Czechoslovakia just before the outbreak of the Great War, and educated in the classical European tradition, he knows well the days when scholars commanded such respect that astronomical congresses would be visited by Heads of State. Yet within his own lifetime, he has himself been recruited to play an important role in scientific preparations for a manned Moon landing. He has known and worked with some of the most highly respected practitioners of Modern Astromomy: Russell, Shapley, Urey in the United States, Eddington in Britain. His fine eye for detail, coupled with his strong sense of history, enable him to unfold through his personal recollections the development of his subject across the social changes of two world wars. Inspired by his grandfather, who would think nothing of walking sixty miles to theatrical performance, the young Kopal acquired a Wanderlust that has taken him in his career more than a dozen times rond the world. He has visited the most ancient observatories, observed solar eclipses in Japan and Java, helped to establish new institutions in Iraq and India, and commuted for many years between the Old and New Worlds. He has toiled in every corner of his chosen vinyard: as observer, outstanding theoretician, populariser, editor and teacher. During his thirty years as Professor of Astronomy at Manchester, he helped to educate over a hundered PhD students, many from the developing world, who have taken the torch of astronomy back to their home lands. In retirement, he continues to direct his efforts towards a better understanding of the Universe, and shows no sign of abandoning his life-long affair with the heavens. Professor Kopal has entitled his book Of Stars and Men, for he has delighted in the company of both throughout his life. The reader is invited to share with him the story of his birth, his education, his work and his travels; and to join with him in contemplating the history and possible future of his subject, and of civilisation itself.

The roots: Awakening: Rendezvous with destiny. Lehr- und wanderjahre: Charles University. Student years in Prague. First travels abroad. Postgraduate years and first trip to Far East. 1936/38 - the doctorate and the first postdoctoral year. The American years: Harvard College Observatory and eclipsing variables. The war years - broadcaster to occupied Europe. War years at Massachusetts Institute of Technology. Post-war years in Cambridge. The Manchester years: Space science and astronomy of the Moon. International travels and adventures. Summing up. The binary stars: Astronomoy of the past and in the future: Will our civilisation survive? Index.

Of Stars and Men: Reminiscences of an Astronomer