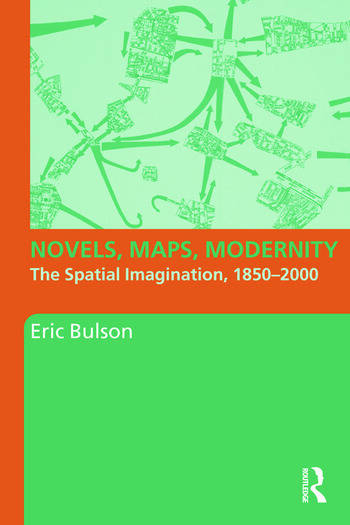 "Novels, Maps, Modernity is a remarkable book that promises to transform our knowledge of the representation of space in modern fiction." - Brian Richardson, University of Maryland

Novels, Maps, Modernity argues that cartographic devices—including maps, sea charts, and aerial photographs—have radically shaped how novelistic space has been imagined and represented from the midnineteenth century to the end of the twentieth. More than an antidote to disorientation, Eric Bulson demonstrates that they conceal a more complex story about capitalism, urbanization, empire, and world war.

Guiding readers through the "cartographic encounters" of Melville, Joyce, Pynchon and the long tradition of literary mapping, Bulson provides an original and thoughtful argument about space and the modern novel.

In this volume, Bulson examines:

• the development of novelistic space from realism to postmodernism

• the "reality effect" of mapping and signposting within novels

• the juxtaposition of map and text

• the rise of literary maps and guidebooks.

Eric Bulson is Associate Professor of English at Claremont Graduate University, US.

"Bulson has written a volume…that provides lucid and imaginative observations on the novelistic representation of place from the mid-nineteenth century works of Charles Dickens and Herman Melville to late twentieth-century fiction by Thomas Pynchon and W.G. Sebald. Bulson’s point of departure is the seldom acknowledged importance that documents of geographical orientation—most notably maps and guide books—have played in the writing, reading, and criticism of fiction. As a work of literary criticism, Novels, Maps, Modernity is well researched, provocative, and highly readable. Not only does it offer fresh readings of three of the most widely studied novels in the Anglo-American canon, but it provides new ways of looking at any novelistic representation of geographical place." –Jon Hegglund, Washington State University, Modern Philology