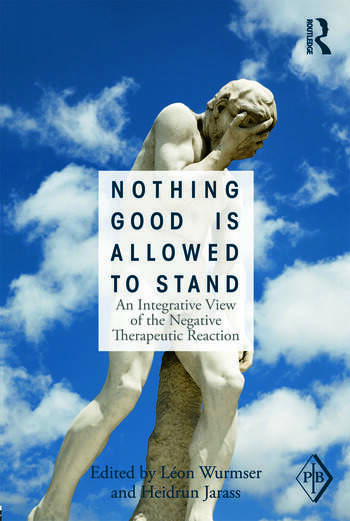 Nothing Good Is Allowed to Stand: An Integrative View of the Negative Therapeutic Reaction

Work with patients with severe neuroses very often has to cope with the phenomenon that every progress in the analytic or therapeutic work is followed paradoxically by a clinical deterioration. There are a number of dynamic factors that converge to bring about this negative therapeutic reaction, including many-layered guilt and shame, aspects of envy and jealousy, attachment to negative affects, turning trauma from passive to active, conflicts within the superego, and the defensive use of omnipotence of responsibility.

In Nothing Good Is Allowed to Stand, Wurmser, Jarass, and their colleagues consider these and other factors insightfully, such as the extent to which traumatization lives on in self-directed aggressions of the superego in the claim of omnipotence; the significant role of deep conflicts between opposite values and loyalties in bringing about the prohibition of anything "good" and thus of the negative therapeutic reaction in particular and masochism in general; and the extent to which envy, jealousy, and resentment can be encountered in the "inner object," the "inner judge" (i.e., the superego), and how they are directed against the self.

Léon Wurmser, M.D., is a Training and Supervising Analyst at the New York Freudian Society. His publications include The Power of the Inner Judge (Jason Aronson, 2000), Jealousy and Envy (with Heidrun Jarass; Analytic Press, 2007), and Torment Me, but Don't Abandon Me! (Jason Aronson, 2007). He maintains a private practice in Towson, MD.

Heidrun Jarass, M.D., is a Training and Supervising Analyst at the Institute for Psychoanalysis of the German Psychoanalytic Society, Nurnberg. A psychoanalyst in private practice, she has been active in psychoanalytic research, focusing on the psychodynamic processes in supervision, and has presented her work with severely ill patients at international meetings. She co-edited (with Leon Wurmser) Jealousy and Envy (Analytic Press, 2007).

Nothing Good Is Allowed to Stand: An Integrative View of the Negative Therapeutic Reaction