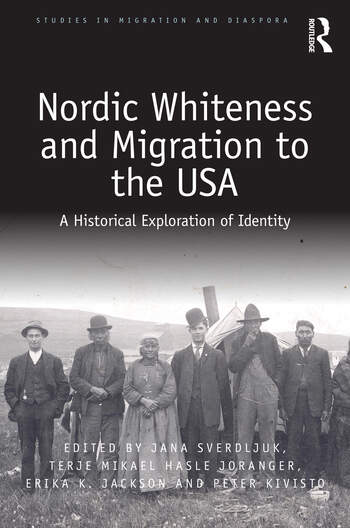 Nordic Whiteness and Migration to the USA: A Historical Exploration of Identity

This volume explores the complex and contradictory ways in which the cultural, scientific and political myth of whiteness has influenced identities, self-perceptions and the process of integration of Nordic immigrants into multicultural and racially segregated American society in the 19th and 20th centuries. In deploying central insights from whiteness studies, postcolonial feminist and intersectionality theories, it shows that Nordic immigrants - Danes, Swedes, Finns, Norwegians and Sámi - contributed to and challenged American racism and white identity. A diverse group of immigrants, they could proclaim themselves ‘hyper-white’ and ‘better citizens than anybody else’, including Anglo-Saxons, thus taking for granted the racial bias of American citizenship and ownership rights, yet there were also various, unexpected intersections of whiteness with ethnicity, regional belonging, gender, sexuality, and political views. ‘Nordic whiteness’, then, was not a monolithic notion in the USA and could be challenged by other identities, which could even turn white Nordic immigrants into marginalized figures. A fascinating study of whiteness and identity among white migrants in the USA, Nordic Whiteness will appeal to scholars of sociology, history and anthropology with interests in Scandinavian studies, migration and diaspora studies and American studies.

1. Norwegian Migration and Displaced Indigenous Peoples: Toward an Understanding of Nordic Whiteness in the Land-taking

Part 2: Not Quite White: Painful Experiences of Sámi Immigrants

Part 3: White Immigrants and the Failure of Class Solidarity

3. "On Liberty and Equality": Race and Reconstruction among Scandinavian Immigrants, 1864-1868

Part 4: Nordic Superiority and the Derogatory Representations of Others

4. Atop a Hierarchy of Whiteness: Danish Americans as Portrayed by Danish Travel Writers in the Second Half of the Nineteenth Century

5. Good Americans "Born of a Good People": Race, Whiteness, and Nationalism Among Norwegian Americans in the Pacific Northwest

7. In the American Matrix: Norwegians in Chicago in the Nineteenth Century

8. Claiming Roots: Politics of Racial Ancestry in the Finnish-American Press during the 1938 New Sweden Tercentenary

9. The Nordic Mystique: Swedish Women as Sexualized "Other" in Postwar America

Jana Sverdljuk is research librarian and curator of migration archives at the National Library of Norway. She has PhD from the Centre for Gender Research at Norwegian University of Science and Technology (NTNU).

is Director of the Norwegian Emigrant Museum and has a Ph.D. in history from the Department of Archaeology, Conservation and History at the University of Oslo.

is Associate Professor of History at Colorado Mesa University, USA, and the author of Scandinavians in Chicago: The Origins of White Privilege in Modern America.

is the Richard A. Swanson Professor of Social Thought at Augustana College and Co-Director of the Laboratory on Transnationalism and Migration Processes at St. Petersburg State University, Russia. He has published 35 books, including works on radical Finnish immigrants in the United States and more recent work focusing on theories of immigration, particularly transnationalism and multiculturalism. In 2013, he received an Honorary Doctorate from the University of Turku after spending four years there as a Finland Distinguished Professor.

Nordic Whiteness and Migration to the USA: A Historical Exploration of Identity