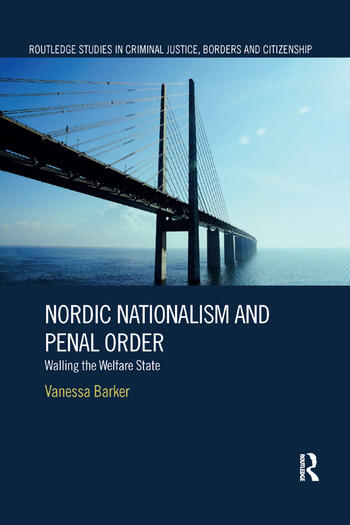 In late summer 2015, Sweden embarked on one of the largest self-described humanitarian efforts in its history, opening its borders to 163,000 asylum seekers fleeing the war in Syria. Six months later this massive effort was over. On January 4, 2016, Sweden closed its border with Denmark. This closure makes a startling reversal of Sweden’s open borders to refugees and contravenes free movement in the Schengen Area, a founding principle of the European Union. What happened? This book sets out to explain this reversal.

In her new and compelling book, Vanessa Barker explores the Swedish case study to challenge several key paradigms for understanding penal order in the twenty-first century and makes an important contribution to our understanding of punishment and welfare states. She questions the dominance of neoliberalism and political economy as the main explanation for the penalization of others, migrants and foreign nationals, and develops an alternative theoretical framework based on the internal logic of the welfare state and democratic theory about citizenship, incorporation, and difference, paying particular attention to questions of belonging, worthiness, and ethnic and gender hierarchies. Her book develops the concept of penal nationalism as an important form of penal power in the twenty-first century, providing a bridge between border control and punishment studies.

2. The Internal Logic of the Welfare State

4. Penal Nationalism: Its Forms and Functions

5. Contesting the Pain of Others

Vanessa Barker is Docent and Associate Professor of Sociology at Stockholm University, Sweden, and Associate Director of Border Criminologies. Her research focuses on questions of democracy and penal order, the welfare state and border control, the criminalization and penalization of migrants, and the role of civil society in penal reform.