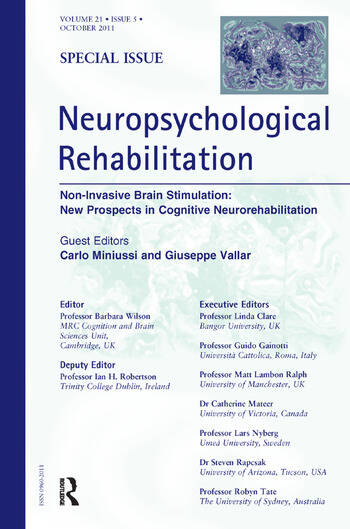 Cognitive deficits are a common consequence of neurological disease, and there is evidence that specific cognitive training may be effective in rehabilitation. Behavioural dysfunction following neurological disease constitutes one of the major causes of disability worldwide, exerts a major impact on the daily life of affected individuals, and their families, also with a financial burden both for patients, and the society in general. Therefore, the adequate treatment of cognitive dysfunction is a much relevant issue, with social and economical implications, over and above the neuropsychological problem per se.

Several investigations emphasise the fact that interacting with neural activity, by means of cortical stimulation, can affect cognitive performance. A number of studies have reported enhanced performance in specific cognitive tasks in patients with several types of neurological disease, after receiving Non Invasive Brain Stimulation (NIBS) to specific cortical areas, namely: Transcranial Magnetic Stimulation, and transcranial Electrical Stimulation. In general, the evidence highlights the possibility of inducing changes in cortical excitability, which, in turn, may lead to a plastic reorganization of dysfunctional networks, responsible for the impaired cognitive functions. Despite these advances, a number of important questions remain open, regarding the use of stimulation techniques in cognitive rehabilitation.

This special issue puts together international leading experts in the field, to review and discuss recent advances as to whether NIBS techniques alone, or combined with behavioural cognitive rehabilitation, can lead to performance enhancements, and why. The issue is timely and promises to have a huge impact across many domains of clinical and basic neuroscience.