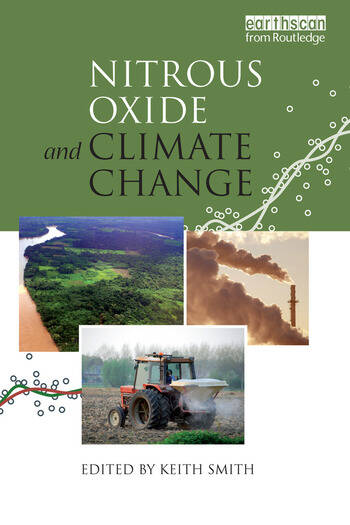 Nitrous oxide, N2O, is the third most important (in global warming terms) of the greenhouse gases, after carbon dioxide and methane. As this book describes, although it only comprises 320 parts per billion of the earth's atmosphere, it has a so-called Global Warming Potential nearly 300 times greater than that of carbon dioxide. N2O emissions are difficult to estimate, because they are predominantly biogenic in origin. The N2O is formed in soils and oceans throughout the world, by the microbial processes of nitrification and denitrification, that utilise the reactive N compounds ammonium and nitrate, respectively. These forms of nitrogen are released during the natural biogeochemical nitrogen cycle, but are also released by human activity. In fact, the quantity of these compounds entering the biosphere has virtually doubled since the beginning of the industrial age, and this increase has been matched by a corresponding increase in N2O emissions. The largest source is now agriculture, driven mainly by the use of synthetic nitrogen fertilisers. The other major diffuse source derives from release of NOx into the atmosphere from fossil fuel combustion and biomass burning, as well as ammonia from livestock manure. Some N2O also comes directly from combustion, and from two processes in the chemical industry: the production of nitric acid, and the production of adipic acid, used in nylon manufacture. Action is being taken to curb the industrial point-source emissions of N2O, but measures to limit or reduce agricultural emissions are inherently more difficult to devise. As we enter an era in which measures are being explored to reduce fossil fuel use and/or capture or sequester the CO2 emissions from the fuel, it is likely that the relative importance of N2O in the 'Kyoto basket' of greenhouse gases will increase, because comparable mitigation measures for N2O are inherently more difficult, and because expansion of the land area devoted to crops, to feed the increasing global population and to accommodate the current development of biofuels, is likely to lead to an increase in N fertiliser use, and thus N2O emission, worldwide. The aim of this book is to provide a synthesis of scientific information on the primary sources and sinks of nitrous oxide and an assessment of likely trends in atmospheric concentrations over the next century and the potential for mitigation measures.

Keith Smith is an Honorary Professor in the School of Geosciences at the University of Edinburgh. He has written extensively on climate change and was the Lead Author and Chair of the IPCC subgroup writing the chapter on Nitrous Oxide in the 2006 IPCC Guidelines for National Greenhouse Gas Inventories.