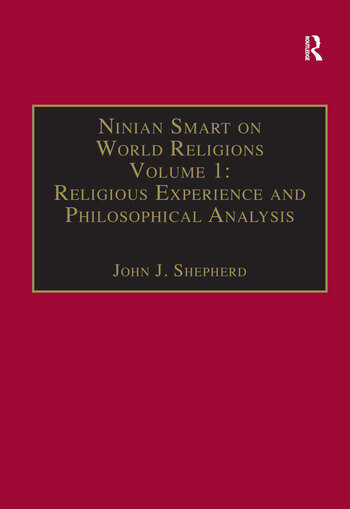 Ninian Smart came to public prominence as the founding Professor of the first British university Department of Religious Studies in the late 1960s. His pioneering views on education in religion proved hugely influential at all levels, from primary schools to academic teaching and research. An unending string of publications, many of them accessible to the general public, sustained a reputation that became worldwide. Here, for the first time, a selection of Ninian Smart's wide-ranging writings is organised systematically under a set of categories which both comprehend and also illuminate his varied output over a career spanning half a century. The editor, John Shepherd, was Principal Lecturer in Religion and Philosophy at the University of Cumbria. He first met Smart as a postgraduate student, and recently helped establish the Ninian Smart Archive at the University of Lancaster.

Contents: Preface; Introduction: a critical analysis; Part I Autobiographical: Methods in my life. Part II Religious Experience and the Logic of Religious Discourse: The comparative logical analysis of religious doctrines; Empiricism and religions: Understanding religious experience. Part III Mystical Experience: Interpretation and mystical experience; The purification of consciousness and the negative path; What would Buddhaghosa have made of The Cloud of Unknowing?. Part IV Comparative Studies: Numen, Nirvana and the definition of religion; What is religion?; Theravada Buddhism and the definition of religion; The work of the Buddha and the work of Christ; The logos doctrine and Eastern beliefs; The comparative view of the person: East and West; Buddhism and the death of God; Types of religious liberation: an implicit critique of modern politics. Part V Religious Studies and Religious Education: Method and Theory in the Study of Religions: Religion as a discipline?; What is comparative religion?; The structure of the comparative study of religion; Scientific studies of religion; Religious studies and the comparative perspective; The study of religion as a multidisciplinary and cross-cultural presence among the human sciences; Comparative religion clichés; The political implications of religious studies. Part VI Religious Ethics: Gods, bliss and morality; The ethics of Chinese Communism; Clarity and imagination as Buddhist means to virtue; Religious values and the university; Sacred civilities; A global ethic arising from the epistemology of religious and similar value-systems. Appendices; Name index.

'John Shepherd has achieved a mammoth task in gathering this extraordinarily rich and diverse collection of Ninian Smart's papers. Carefully selected, skilfully arranged and, most valuable, complemented by a substantial introduction and a complete bibliography of his writings, this work bears witness to Smart's wide- ranging studies on world religions, philosophies and cultures, always set within a larger global vision. A real landmark, this publication reveals like no other Smart's numerous achievements and proves his lasting importance for the contemporary study of religions. It also provides the foundations for a critical reassessment by the next generation of scholars. Exceeding mere academic interest, it has much to offer to all students, teachers and readers interested in world religions or in Ninian Smart as scholar and human being. Surprises will await them on both accounts.' Ursula King, Professor Emerita, University of Bristol, UK Ninian Smart was a seminal figure in the emerging discipline of religious studies and this book of wide-ranging, incisive and often witty essays helps us to understand why. Ranging from ancient Buddhism to contemporary Californian culture, and from ethics to worldview analysis, these essays show how Smart's agile and inventive mind helped to create a new academic discipline. This useful book deserves to be on the shelf of every serious scholar of religious studies as a reference, inspiration, and testimony to one of the intellectual giants of the twentieth century. Mark Juergensmeyer, Professor, University of California, Santa Barbara, author of "Terror in the Mind of God and Global Rebellion" and president-elect, American Academy of Religion. 'Ninian Smart was arguably one of the most gifted and tough-minded thinkers in the field of religious studies of the past generation. This collection of writings -- many difficult to find -- will make available a wide range of remarkable work, displaying in full the best qualities of Smart's thinking. As such, it will be a valuable resource for future work in the study of religion.' Ivan Strenski, Professor, UC Riverside, USA 'It is very clear that Shepherd has done a masterful job in collecting the only complete bibliography of Smart's enormous contributions to the study of religion in the last half of the twentieth century. This is a work which will be definitive and authoritative and will contribute much at three levels. First, Smart was the heir of a long tradition of scholarship on religion. How he assimilated that tradition and at the same time made major advances in how we might study religion is fully documented in this collection. So much of Smart's way of doing the study of religion has become so common place that we often overlook how we achieved the present state of the discipline. Shepherd's collection of Smart's work should lead a new generation of scholars to consider the powers of comparison and to execute an intellectual agenda with the same boldness of spirit which is present in the corpus of Smart's work. As a marker of where we have been and where we might go, this collection will be indispensable. Third, Smart's contribution to the pedagogy of the study of religion is equally remarkable and is fully present for the first time in this collection. This collection by Shepherd will thus help to train new generations of teachers who will make their contributions not only in their published research, but also in how they enact and carry forward the study of religion in their classrooms and lecture halls. This will be a very important contribution to scholarship and I urge you to think boldly about how it might be realized in its entirety.' Richard Hecht, Professor, University of California, Santa Barbara, USA 'Ninian Smart will surely remain best known for his philosophically informed analyses of religion as a cultural phenomenon, but his numerous occasional writings provided entertainment and stimulation, for some disturbing and for others liberating. He was unstoppably creative.' Michael Pye, Professor, University of Marburg, Germany. President of the International Association for the History of Religions 1995-2000 'John Shepherd, a student of Ninian Smart's at Lancaster University and the organizer of the Ninian Smart Archive at Lancaster, knows the Smart corpus better than anyone else. For "Ninian Smart on World Religions" he has chosen writings that evince the extraordinary range of Smart's work on religion. Smart wrote about religion generally and about specific religions, both Western and Eastern. He contributed to the philosophy of religion, to the sociology of religion, to the comparison of religions, to mysticism, to religious ethics, and to religious dialogue. He linked up traditional religions with new ones and with secular ones. His approach, like his character, was inclusivist and irenic rather than exclusivist and dogmatic. He knew multiple religions firsthand, not just in the a