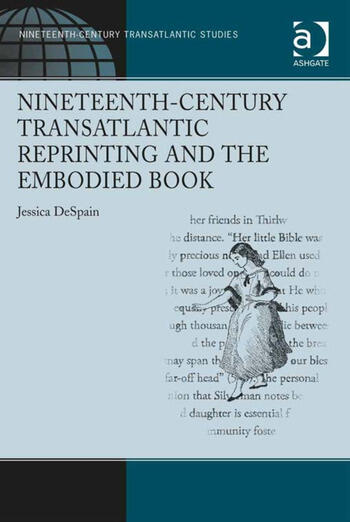 Until the Chace Act in 1891, no international copyright law existed between Britain and the United States, which meant publishers were free to edit text, excerpt whole passages, add new illustrations, and substantially redesign a book's appearance. In spite of this ongoing process of transatlantic transformation of texts, the metaphor of the book as a physical embodiment of its author persisted. Jessica DeSpain's study of this period of textual instability examines how the physical book acted as a major form of cultural exchange between Britain and the United States that called attention to volatile texts and the identities they manifested. Focusing on four influential works”Charles Dickens's American Notes for General Circulation, Susan Warner's The Wide, Wide World, Fanny Kemble's Journal of a Residence on a Georgian Plantation, and Walt Whitman's Democratic Vistas”DeSpain shows that for authors, readers, and publishers struggling with the unpredictability of the textual body, the physical book and the physical body became interchangeable metaphors of flux. At the same time, discourses of destabilized bodies inflected issues essential to transatlantic culture, including class, gender, religion, and slavery, while the practice of reprinting challenged the concepts of individual identity, personal property, and national identity.

"Jessica DeSpain brings together an intriguing combination of works by Charles Dickens, Susan Warner, Fanny Kemble, and Walt Whitman to produce a rich understanding of the culture of reprinting. The result is a thought-provoking and informative exploration of reprinting and textual adaptation in a transatlantic context."

"DeSpain’s Nineteenth-Century Transatlantic Reprinting and the Embodied Book will surely be a touchstone of future scholarship on textual studies, cultural materialism, and nineteenth-century literary culture. Her close, critical reading of texts – paired with her archival research and reproduced artwork – articulate a deep historical concern about modality and materiality that persists today, and her monograph contributes to an ever-expanding field of study where DeSpain’s voice is sure to find its audience."