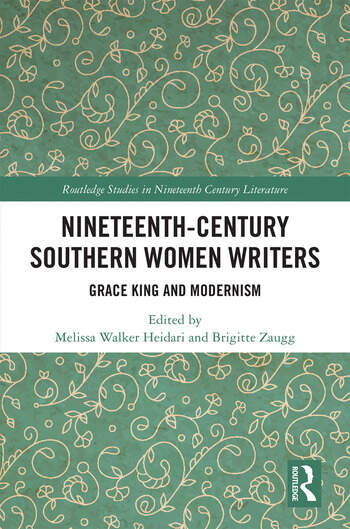 The essays in this book explore the role of Grace King’s fiction in the movement of American literature from local color and realism to modernism and show that her work exposes a postbellum New Orleans that is fragmented socially, politically, and linguistically. In her introduction, Melissa Walker Heidari examines selections from King’s journals and letters as views into her journey toward a modernist aesthetic—what King describes in one passage as "the continual voyage I made." Sirpa Salenius sees King’s fiction as a challenge to dominant conceptualizations of womanhood and a reaction against female oppression and heteronormativity. In his analysis of "An Affair of the Heart," Ralph J. Poole highlights the rhetoric of excess that reveals a social satire debunking sexual and racial double standards. Ineke Bockting shows the modernist aspects of King’s fiction through a stylistic analysis which explores spatial, temporal, biological, psychological, social, and racial liminalities. Françoise Buisson demonstrates that King’s writing "is inspired by the Southern oral tradition but goes beyond it by taking on a theatrical dimension that can be quite modern and even experimental at times." Kathie Birat claims that it is important to underline King’s relationship to realism, "for the metonymic functioning of space as a signifier for social relations is an important characteristic of the realist novel." Stéphanie Durrans analyzes "The Story of a Day" as an incest narrative and focuses on King’s development of a modernist aesthetics to serve her terrifying investigation into social ills as she probes the inner world of her silent character. Amy Doherty Mohr explores intersections between regionalism and modernism in public and silenced histories, as well as King’s treatment of myth and mobility. Brigitte Zaugg examines in "The Little Convent Girl" King’s presentation of the figure of the double and the issue of language as well as the narrative voice, which, she argues, "definitely inscribes the text, with its understatement, economy and quiet symbolism, in the modernist tradition." Miki Pfeffer closes the collection with an afterword in which she offers excerpts from King’s letters as encouragement for "scholars to seek Grace King as a primary source," arguing that "Grace King’s own words seem best able to dialogue with the critical readings herein." Each of these essays enables us to see King’s place in the construction of modernity; each illuminates the "continual voyage" that King made.

"The continual voyage I made": Grace King’s Journey to Modernity

"Passionément was what I wanted":

The Theatricality of Writing in Grace King’s Short Stories:

Invisible Women on the Balcony

Lifting the Veil from "The Story of a Day"

Myths of Domesticity and Mobility in

Grace King’s "A Crippled Hope" and "The Little Convent Girl"

Putting Up the Veil to See Better:

Going to the Source: Grace King’s Papers and Critical Analysis

Melissa Walker Heidari is a professor of English at Columbia College, South Carolina, where she teaches American literature. She is the editor of "To Find My Own Peace": Grace King in Her Journals, 1886–1910 (University of Georgia Press, 2004). In addition to her scholarship on Grace King, she has published and presented papers on other nineteenth-century writers, with a special interest in American Gothic fiction.

is an associate professor at the Université de Lorraine, Metz, France, where she teaches American literature and translation. She wrote her PhD dissertation on Ellen Glasgow and has published articles mostly on nineteenth-century American women writers, in particular Kate Chopin, Willa Cather, and Edith Wharton, but also on Margaret Mitchell and Bobbie Ann Mason. She has co-edited seven academic books and in her spare time translates novels for a bilingual publishing house, the latest to date being a co-translation of L. Frank Baum’s The Wonderful Wizard of Oz (Oxalide, 2018).