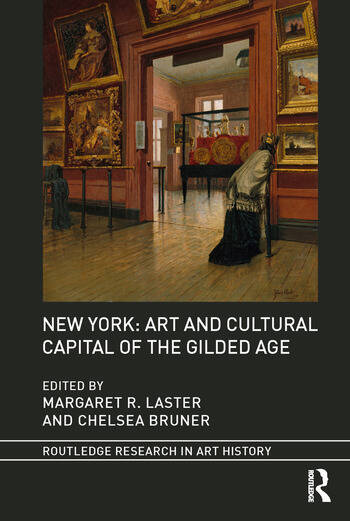 New York: Art and Cultural Capital of the Gilded Age

Fueled by a flourishing capitalist economy, undergirded by advancements in architectural design and urban infrastructure, and patronized by growing bourgeois and elite classes, New York’s built environment was dramatically transformed in the 1870s and 1880s. This book argues that this constituted the formative period of New York’s modernization and cosmopolitanism—the product of a vital self-consciousness and a deliberate intent on the part of its elite citizenry to create a world-class cultural metropolis reflecting the city’s economic and political preeminence. The interdisciplinary essays in this book examine New York’s late nineteenth-century evolution not simply as a question of its physical layout but also in terms of its radically new social composition, comprising the individuals, institutions, and organizations that played determining roles in the city’s cultural ascendancy.

Part I. Creating the Art and Cultural Capital

3. Aestheticizing Tendencies in Hudson River School Landscape Painting at the Beginning of the Gilded Age

Part II. Institutionalizing Art and Culture in the Capital

6. An Unsung Hero: Henry Gurdon Marquand and His 1889 Gift to The Metropolitan Museum of Art

7. Metropolitan, Inc.: Public Subsidy and Private Gain at the Genesis of the American Art Museum

8. Un-Domesticating the Ideal: William Wetmore Story and The Metropolitan Museum of Art

Part III. Depicting the Capital in Art and Culture

9. Before the Farragut: Who Was Augustus Saint-Gaudens?

10. Crossing Broadway: New York and the Culture of Capital in the Late Nineteenth Century

Margaret R. Laster is an independent curator and scholar of American art. Previous posts include Associate Curator of American Art at the New-York Historical Society, and Lunder Consortium for Whistler Studies Fellow at the Freer Gallery of Art. Her research centers on art and material culture of the nineteenth century, including Gilded Age collecting and patronage histories.

is a member of the liberal arts faculty at Ringling College of Art and Design in Sarasota, Florida, where she teaches Design History. Her work centers on architecture and interiors of the nineteenth and twentieth century, with an emphasis on elite patronage and the professionalization of architectural design in the Gilded Age.

"Those of us who teach should ask our university librarians to purchase the ebook in addition to the hardcover, so that individual essays can be downloaded, paired, and assigned to students in our undergraduate classes. All are well written and eminently readable by students and scholars alike."

New York: Art and Cultural Capital of the Gilded Age