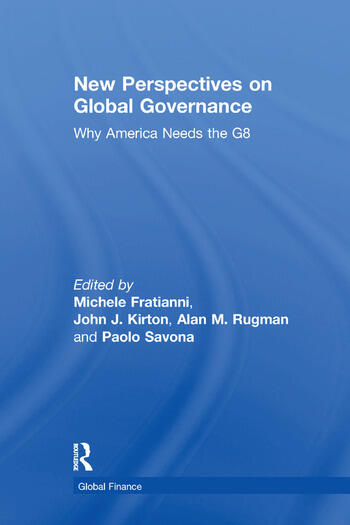 New Perspectives on Global Governance: Why America Needs the G8

On its 30th anniversary in 2004 responsibility for hosting the G8 Summit fell into the hands of an allegedly unilateralist America. An America still reeling from the shock of the September 11th terrorist attacks, the resulting economic recession, bitter divisions with its NATO allies and disappointment with the United Nations Institutions over the 2003 Iraq war. So why does America still need the G8? New Perspectives on Global Governance offers new insight into the role of the Group of Eight's major market democracies and challenges the assumption that the G8 is simply a forum for binding a unilateralist hegemonic America. In contrast to seeing the G8 as a means of imposing an American world order this unique collection of new writings suggests that a now vulnerable America must rely on the G8 as a central instrument of foreign policy. America needs the G8 to achieve its security, economic and political interests in the world and to shape the twenty-first central global order it so desperately wants.

Contents: Preface; Introduction, Michele Fratianni, John J. Kirton, Alan M. Rugman and Paolo Savona. Part I The G8 in the Past and in the Future: Do we need the G8 Summit? Lessons from the past, looking ahead to the future, Nicholas Bayne; America at the G8: from vulnerability to victory at the Sea Island Summit, John J. Kirton; Russia in the G8: from Sea Island 2004 to Russia 2006, Victoria Panova; The G8 in a globalising world: does the United States need the G8? Bernhard May. Part II Prosperity and Security; Advancing American security interests through the G8, Risto E.J. PenttilÃ¤; Economic growth and national security, David B. Audretsch, Richard M. Stazinski and T. Taylor Aldridge; Borders and international terrorism, Michele Fratianni and Heejoon Kang; The G8 and the governance of cyberspace, Jeffrey A. Hart; US energy security and regional business, Alan M. Rugman. Part III Finance and Security: Combating black money: international co-operation and the G8, Donato Masciandaro; Terrorist finance: within the grip of the G8?, George M. von Furstenberg. Part IV The G8 and International Trade Policy: Summitry and trade: what Sea Island could do for Doha, Sylvia Ostry; Effective of defective? The G8 and multilateral trade negotiations, Heidi K. Ullrich. Conclusion: New perspectives on the G8, John J. Kirton, Michele Fratianni, Alan M. Rugman and Paolo Savona. Documentary appendices. Bibliography. Index.

New Perspectives on Global Governance: Why America Needs the G8