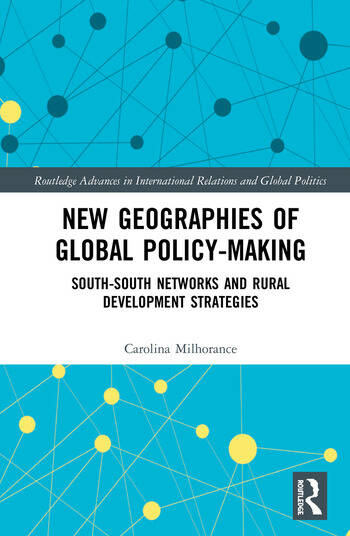 International institutions and agencies from the Global North are no longer the sole initiators of development norms and best practices. The proliferation of exports and imports of social, economic and policy management models have called for a rethinking of South–South relations. To date, most studies have focused on the drivers and strategies of international initiatives made by emerging powers; none have analysed the impact of these initiatives on the receiving country’s institutions, and on the structures of international organisations. In this book, Carolina Milhorance examines the content, process and consequences of the internationalisation of Brazil’s rural public policy instruments. Brazil earned wide international recognition in the early 2000s for its agricultural modernisation and social policies; its increasing influence illustrated the specific political interests of coalitions that are embedded in domestic and international struggles. Drawing on extensive field research – including more than 280 interviews – conducted in Brazil, Mozambique, South Africa, Malawi, France and Italy, Milhorance analyses the effects of the internationalisation of Brazilian policy solutions on national and local political systems in recipient countries, highlighting specifically the case of Mozambique. Relying on a new theoretical approach to International Relations – one based on public policy analysis and international political sociology – she moves beyond a debate about conventional notions of international power.

6. Influence of Brazilian Solutions in Mozambique: Consolidation of an ‘Extractive Model’

7. Influence of Brazilian Solutions in Mozambique: Dissonance Around the State’s Role

Carolina Milhorance is a researcher at the Centre for Sustainable Development at the University of Brasilia. She has a PhD in Political Science from the University of Paris Saclay and the University of Brasilia. Milhorance prepared this book while she was a research fellow at the French Centre for Agricultural Research and International Development. She has also worked for the OECD, the FAO office in Mozambique, the French Institute for Sustainable Development and International Relations and the Brazilian Fund for Biodiversity. Her research currently focuses on the following subjects: Brazil–Africa and triangular cooperation in the rural sector, the role of International Organisations in processes of policy transfer, and climate adaptation policies in the Brazilian Amazon and semi-arid regions.

'The recent Brazilian experience of connecting economic instruments to social policies inspired a new type of South-South cooperation that is focused on sharing public policy know-how. This book provides valuable empirical and theoretical resources for understanding the originality of the Brazilian international action and its presence in Mozambique.'

'Richly researched and boldly theorized, this book traces the internationalization and transfer of Brazilian agricultural policy from competing domestic coalitions, through international organizations, and finally to recipient countries. Milhorance manages to capture all the stages, actors, their ideas and their conflicts, in a unified narrative that significantly advances the field.'

—Leslie A. Pal, Chancellor's Professor of Public Policy and Administration and Director, Centre on Governance and Public Management, Carleton University

'Policy transfer from Europe and North America has been a popular topic in the social sciences but at last we have an original study that moves away from Western-centric analysis.  New Geographies of Global Policy-Making focuses on Brazil’s leading capacity to share policy solutions with Latin American and African countries. Innovative in theory and rich in detail, Carolina Milhorance delves into the networks of actors at multiple levels of governance to better account for the historical and political distinctiveness of South-South exchanges. In her compelling study of food security and rural policy we have a fascinating analysis of how international norms travel and are interpreted in myriad policy translations across different national contexts. This book is thoughtful, authoritative and a ‘must-read’ for academics and policy analysts alike who see the signs of the emergence of global policy making.'