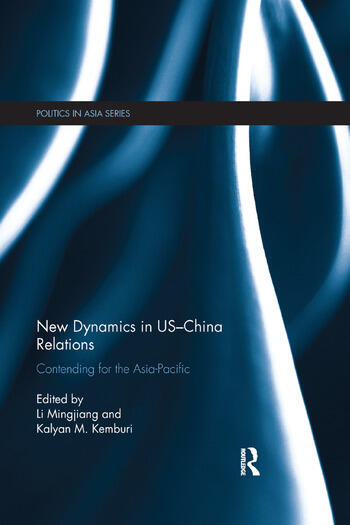 New Dynamics in US-China Relations: Contending for the Asia Pacific

Washington’s strategic pivot to Asia and Beijing’s pursuit of new strategic and security interests in the region have led to increasing tensions between the two powers. US leaders have stressed that their increased interest in Asia is driven by a desire to benefit from the thriving regional economies, as well as to play the leading role in maintaining peace and stability in the region. However, Beijing is particularly concerned about US efforts to consolidate its alliances and deepen security partnerships with a number of regional states. Given the centrality of the two powers to the strategic stability and economic development of the region, these new dynamics in US-China relations must be properly understood and appropriately handled.

This book examines the growing Sino-US strategic rivalry in the Asia-Pacific alongside the strategies employed in the management of this relationship. In turn, it illuminates the sources of conflict and cooperation in US-China relations, looking specifically at maritime disputes, economic relations, energy security, non-traditional security, defence and strategic forces, and Taiwan. Finally, it explores the role of regional states in shaping US-China relations, and in doing so covers the influence of Japan, India, the Korean Peninsula, the Philippines, Vietnam, Myanmar, and Cambodia. With chapters from leading scholars and analysts this book deals with a diverse range of issues including strategic rivalry, expanding regional trade relations, non-traditional security issues, the role of energy security, maritime security and how Asian states view their relations with the US and China respectively.

will be of huge interest to students and scholars of Asian politics, US politics, international relation and security studies, as well as practitioners involved in framing and implementing foreign, security and economic policy pertaining to the Asia Pacific.

Introduction, Mingjiang Li and Kalyan M. Kemburi  Part I: Growing Sino-US Strategic Rivalry in the Asia-Pacific 1. US Strategic Rebalancing and Rise of China, Abraham Denmark 2. Managing US-China Relations: Taking the Sour with the Sweet, Ralph Cossa 3. Strategic Trust Deficit and its Impact on the Future of China-US Relations, Richard W. Hu 4. Shaping the Future of Sino-American Relations: Power Shift and Strategic Rivalry, Chen Dingding 5. Engaging China and the United States: Perils and Prospects for ASEAN Diplomacy in the Age of Rebalancing, Tan See Seng  Part II: Sino-US Interactions: Sources of Cooperation and Conflict 6. China, the U.S. and Maritime Security in East Asia: A Chinese Perspective, Li Jianwei 7. Navigating an Uncertain Future: US-China Relations and the Maritime Security of the Asia-Pacific, Stephanie Kleine-Ahlbrandt 8. US-China Economic Relations in the Asia-Pacific: Opportunities and Challenges, Sarah Tong 9. China, the United States and Non-Traditional Security: Low-Hanging Fruit or Fool’s Gold?, J. Jackson Ewing 10. Energy Security and US-China Relations in the Asia-Pacific, Zhao Hong 11. The Coming U.S.-China Military Showdown in Asia: Why it could happen, and how it can be prevented, Jing-dong Yuan 12. The Dilemma in Cross-Strait Relations: Can Political Accommodation be Ensured?, Chihwei Hu  Part III: Dancing with the Giants: Role of Regional States in Sino-US Relations 13. The US-Japan Alliance and Cloud Cooperation: A New Approach to Maintaining Stability in the Asia-Pacific, Michael Auslin 14. The Strategic Triangle: India’s Opportunities and Challenges, C. Raja Mohan 15. China’s Strategic Imprint on the Korean Peninsula: Implications for the US-ROK Alliance, Michael Raska 16. Changing Dynamics in Philippines-China-US Relations: Impact of the South China Sea Disputes, Aileen Baviera 17. Engaging Two Giants: Myanmar’s Relations with the US and China in the ASEAN Context, Moe Thuzar 18. Power Rivalry, Party Crisis, and Patriotism: New Dynamics in the Vietnam-China-US Triangle, Alexander L. Vuving 19. The China-Cambodia-US Nexus, Sophal Ear

New Dynamics in US-China Relations: Contending for the Asia Pacific