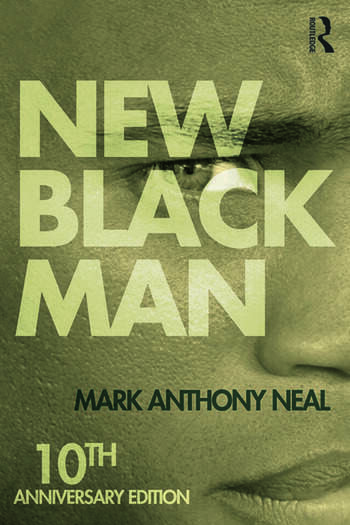 Ten years ago, Mark Anthony Neal’s New Black Man put forth a revolutionary model of Black masculinity for the twenty-first century—one that moved beyond patriarchy to embrace feminism and combat homophobia. Now, Neal’s book is more vital than ever, urging us to imagine a New Black Man whose strength resides in family, community, and diversity. Part memoir, part manifesto, this book celebrates the Black man of our times in all his vibrancy and virility.

The tenth anniversary edition of this classic text includes a new foreword by Joan Morgan and a new introduction and postscript from Neal, which bring the issues in the book up to the present day.

Mark Anthony Neal is a Professor of African and African-American Studies and Director of the Center for the Arts, Digital Culture and Entrepreneurship (CADCE) at Duke University. Neal also hosts the weekly video webcast Left of Black, and is founder and managing editor of the blog NewBlackMan (in Exile). You can follow him on Twitter @NewBlackMan.

Deeply personal, wickedly insightful, and politically transformative, New Black Man is a must-read on black men and feminism in the 21st century. Neal demonstrates yet again why he is one of the leading scholar-activists of our time.
David Ikard, chair of Africana Studies, University of Miami

Mark Anthony Neal is just about as dope as dope can get. In New Black Man, he provided the blueprint for a new generation of black men to do the work of interrogating masculinity, and a decade later it is still the definitive black male feminist text. It's a classic in every sense of the word.
Mychal Denzel Smith, Knobler Fellow at The Nation Institute and contributing writer for The Nation

Mark Anthony Neal’s critique of old modes of discussing black masculinity is eloquent. Indeed, his analysis of the "the strong black man" and the risks that idea poses to black liberation is long overdue. Engaging, thoughtful, and soulful, this important book is part cultural criticism and part blueprint for a new version of black masculinity (without homophobia and misogyny). I, for one, welcome the arrival onto the scene of the "new black man."
Dwight A. McBride, author of Why I Hate Abercrombie & Fitch: Essays on Race and Sexuality

You need oxygen to breathe more than the fetid air of homophobia, misogyny, antiblack racism in the empire and its possessions. Read Mark Anthony Neal’s New Black Man. Here, Neal redefines the "burden" and expands the struggle for a society free of denigration and violence.
Joy James, author of Shadowboxing: Representations of Black Feminist Politics

Mark Anthony Neal has always been a daring scholar, but in this work he does pirouettes on a razor’s edge, deliberately and deftly defying the keepers of the weary worn "race man" trope and all its essentialist trappings.
E. Patrick Johnson, author of Appropriating Blackness: Performance and the Politics of Authenticity

Mark Anthony Neal’s New Black Man is a fascinating exploration of an important scholar’s acknowledgement of black feminism as a central mode of cultural investigation and a mode of humane existence.
Michael Awkward, author of Negotiating Difference: Race, Gender, and the Politics of Positionality

Part academic treatise, part soul-baring memoir, New Black Man is the unlikely offspring of hip-hop and feminism. … Neal offers a call to action by challenging not only the conventional white powers that be, but also the black men who sanction inequality by upholding patriarchy and heterosexism.
Adam Bradley, The Washington Post

Far from being a dull polemic, Neal's new work is sharp, provocative, and often laugh-out-loud funny in the manner of Michael Eric Dyson and Ishmael Reed (caveat: Neal's language can be rough). … [T]his book is a clarion call that should be read by the entire African American community.
Anthony J. Adam, Library Journal

Mark Anthony Neal’s New Black Man is an exploration of modern black masculinity put into conversation with progressive ideas of feminism, fatherhood, and antihomophobia. … For readers whose knowledge of African American feminism begins with Sojourner Truth and ends with bell hooks, the breadth of Neal’s scholarship will prove very useful.
Malcolm Womack, Journal of Popular Culture

In a gripping "tell it like it is" style, Neal advocates a different role model—the "New Black Man"—and promotes a theoretical alliance with black feminism. … New Black Man will be an asset to many undergraduate and graduate courses.
Jo-Ann Morgan, Journal of American Culture