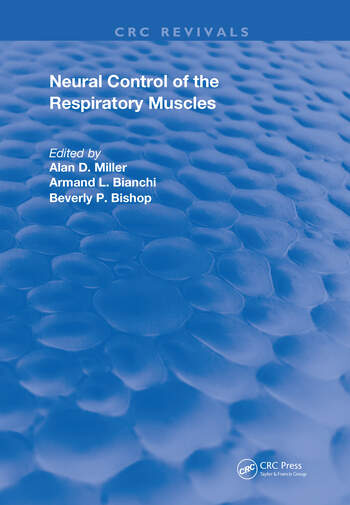 Neural Control of the Respiratory Muscles

First published in 1997. The respiratory muscles are multifunctional muscles involved in other behaviors besides breathing -- from the protection of the upper airway to cognitive functions such as speech or singing. Neural Control of the Respiratory Muscles presents an overall consideration of how these muscles are regulated by the central nervous system in normal as well as in pathological situations.

Alan D. Miller, Ph.D., is Associate Professor of Neurophysiology at the Rockefeller University (New York). He received his Ph.D. degree in Physiology from the University of Western Ontario (London, Canada) in 1980.

Beverly P. Bishop, Ph.D., is a Distinguished Teaching Professor at the State University of New York at Buffalo. She obtained her Ph.D. degree in Physiology from the University of Buffalo in 1958 before that University became part of the state system and has been a member of the faculty of that department for the intervening years.

Neural Control of the Respiratory Muscles