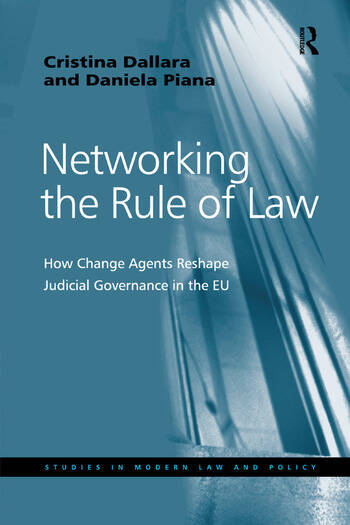 Networking the Rule of Law: How Change Agents Reshape Judicial Governance in the EU

Judicial networks have proved effective in influencing recent judicial policies enacted by both old and new EU member states. However, this influence has not been standard. This volume seeks to improve our understanding of how networks function, as well as the extent they matter in the governance of a constitutional democracy. The authors examine the judicial function of networks, the way they cross the legal and territorial borders that confine the jurisdiction of the domestic institutions, and whether or not they are independent of the capacity and the leadership of their members. A highly salient issue in contemporary law and politics, judicial networks are now qualified actors of governance. With the aim to understand how, to what extent, and with what consequences networks interact with hierarchical institutions that still exist within the States, this book is essential reading for legal experts, policy makers engaged in promoting the rule of law, members of the judicial networks in the EU and extra EU countries, as well as academics and students.

Contents: Introduction: actors, networking, and rule of law: a new puzzle; Rule of law between states and networks; Judicial networks and their instruments; The role of the Venice Commission in two RoL reversal cases: Hungary and Romania; The cross-fertilization of judicial training models; Transnational standards of quality of justice, domestic judicial reforms; Conclusion: networked rule of law: explaining and assessing the rule of law in action; Bibliography; Index.

Cristina Dallara is a permanent researcher at the Research Institute on Judicial Systems of the National Research Council (IRSIG-CNR) in Bologna. She holds a PhD in Political Science from the University of Florence. She was Jean Monnet Post-doc. Fellow at the Robert Schuman Centre, European University Institute, Italy. She has been involved with several international research projects on the role of the EU, the Council of Europe and other international organizations in promoting judicial reforms in the post-communist area. She was also involved as an expert for the European Commission for the Efficiency of Justice - Council of Europe and OSCE in studies and programmes on quality of justice and judicial independence in transitional countries. Daniela Piana is Professor of Political Science at the University of Bologna and Associate Fellow at the Institut des Hautes Etudes sur la Justice in Paris. She has been carrying out comparative research on judicial policies in Western and Eastern Europe as well as on judicial systems. Recently she has worked on a comparative analysis of the intersection between judicial independence and judicial accountability in Italy. She has published extensively on rule of law, constitutional policies, courts, and managerial schemes in public prosecutor offices. Among her most recent books is Judicial Accountabilities in New Europe: from Rule of Law to Quality of Justice, Ashgate, 2010.

"In this scientific and detailed analysis of the slow process of integration in the field of European Justice, the authors demonstrate, once more, how practitioners are well ahead of politicians in setting necessary rules and practices for the transnational collaboration urgently needed to enforce the rule of law." - Judge Cuno Tarfusser, Vice President of the International Criminal Court and Judge of the Pre-Trial Division, The Netherlands

"Networking the Rule of Law represents an extremely valuable contribution to the literature on judicial governance. Drawing on their first-hand experience on rule of law promotion programs in the European Union, as well as on rich empirical data, the authors draw important lessons on the way 'change actors' ultimately reshape those programs. Thus, this volume will be indispensable reading not just to those interested in judicial governance in Europe, but also to students of transnational judicial networks around the world." - Javier Couso, University of Utrecht, The Netherlands, and Universidad Diego Portales, Chile

Networking the Rule of Law: How Change Agents Reshape Judicial Governance in the EU