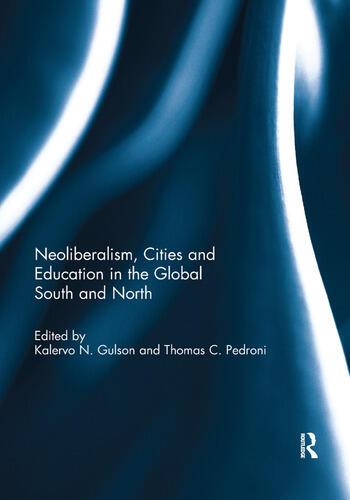 Neoliberalism, Cities and Education in the Global South and North

Across the world, cities are being reshaped in myriad ways by neoliberal forms of globalization, a process of urban restructuring with significant implications for educational policy and practices. The chapters in this collection speak to two complementary but analytically distinguishable aspects of the interplay between education, globalization, cities, and neoliberalism. The first aspect relates to the macro relationships between these powerful global forces on the one hand, and cities and their schools on the other. In particular the book considers the stratifying dynamics that exacerbate already existing inequalities related to race, ethnicity, language, class, and gender—inequalities entailing differential access to the city’s various resources. The second aspect deals with the cultural politics, and logics, of these changes in the city. This recognises that globalization is not simply imposed on the city, but rather becomes insinuated into its fabric through the actions and the agency of local actors and social movements. Against this backdrop, the chapters document how the educational politics of urban contexts in the United States, India, Canada, South Africa and Brazil should be understood as sites in which neoliberal forms of globalization are localised, reproduced, and potentially contested.

This book was originally published as a special issue of Discourse: Studies in the Cultural Politics of Education.

Kalervo N. Gulson is Senior Lecturer in the School of Education, University of New South Wales, Australia. His primary areas of scholarship are educational policy, race and ethnicity studies, and social and cultural geography. Recent work includes Education policy, space and the city: Markets and the (in)visibility of race (Routledge, 2011).

is Associate Professor in Curriculum Studies at Wayne State University, USA. His scholarship centres on race, agency, and inequality in neoliberalizing cities. His new edited volume, Educational markets and the dispossessed, is forthcoming with Teachers College Press.

Neoliberalism, Cities and Education in the Global South and North